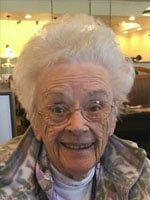 Muriel Peterson Frye passed away very peacefully on May 14th, 2017 at the age of 92 at the Mennonite Home in Lancaster, PA.  She was fortunate enough to live near both her children and enjoyed her visits with them immensely. She lived in Waterville for many years with her husband Miles P Frye on Bartlett Street.

Muriel was the type of person who lit up a room when she came in. She always said there was never a person she met whom she didn’t like and her exuberant personality and positive attitude was infectious.  She went to school at the University of Maine and got her bachelor’s degree, and went on to get a Master’s Degree at the New York School of Social Work.  Not many women of her generation went on to an advanced degree.  After her first child she did not work in the field directly, although this background helped.  She became involved in many organizations volunteering her time to include the Home for the Mentally Retarded, was President of the Woman’s Garden Club, became a member of the Board of Directors for the local school system, and was a director at the Sunset Home. Her crowning achievement was becoming an advocate for the local technical college, Kennebec Valley Community College, helping them to get enough funding to build an entirely new campus and grow exponentially.  Her assistance was rewarded with a building being named after her which to this day is called The Muriel P Frye building.

Muriel had two children, daughter Rebecca Frye Marin whose husband is Dan Marin, and son Andrew Miles Frye whose wife is Gladys Frye.  She had three grandchildren, granddaughter Stephanie Purnell whose husband is Kevin Purnell II, granddaughter Andrea Frye and grandson Miles Reed Frye.  She also was fortunate enough to have two great grandchildren, Brynn Purnell and Korbin Purnell.  She was so proud of her entire family and especially loved visits and pictures of the grands and great grands.

A funeral service is planned at the Maine Veteran’s Memorial Cemetery’s chapel on August 4, 2017 at 1:00 p.m.  A meet and greet will follow, the location of which will be announced at her service.

Offer Condolence for the family of Muriel Peterson Frye