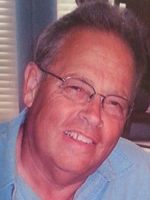 Born in Teegarden, Indiana, he was the son of Orville and Lois (Vance) Stroup.

He spent much of his career as a cylinder maker for R. R. Donnelley and after retirement worked for Fisher Auto.

In his spare time he enjoyed riding his motorcycle and spending time with family.

In addition to his wife Juell, he is survived by his son, Jim E., husband of Suzanne, and daughter Tamara E., wife of Breck McLean; three grandchildren, Zacary, Griffin, and Britney; his brother James, and sisters Mary Ann Upson and Delores (Huts) Strang.  Also surviving is a large extended family, and friends.  He was preceded in death by a sister, Opal Pauline.

Relatives and friends are respectfully invited to attend a Funeral Service at the DeBord Snyder Funeral Home & Crematory, 2024 Marietta Ave., Lancaster, PA 17603 on Thursday, May 21 2015 at 11:00 AM.  A viewing will be held on Thursday at the funeral home from 10:00 AM until the time of the service. Interment will be private and at the convenience of the family.  In lieu of flowers, contributions in Morris’ memory may be made to Humane League of Lancaster or Schreiber Pediatric Rehab Center.

Offer Condolence for the family of Morris E. Stroup