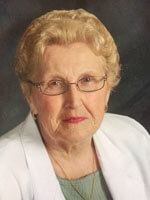 Mona E. Yuninger, 95, a resident of St. John’s Herr Estate, Columbia, died on Saturday, April 15, 2017 at Luther Acres in Lititz, following a brief illness.
She was the wife of the late Carl L. Yuninger who died in 2008. Born in Strasburg she was the daughter of the late James and Edna Ames Guie.
Mona had been employed as a floral designer and then spent 15 years working at Hamilton Watch. She was a member of the Hamilton Park United Church of Christ.
Surviving is a sister, Janice wife of Jim Frey of Strasburg, and nieces and nephews.
A Memorial Service will be held on Sunday, April 23, 2017 at 1:00 P.M. at the Hamilton Park United Church of Christ, 1210 Maple Avenue, Lancaster, PA. The family will greet friends following the service. Interment will be private in Indiantown Gap National Cemetery. In lieu of flowers, contributions in her memory may be made to the PA Breast Cancer Coalition, 2397 Quentin Road, Lebanon, PA 17042.

Offer Condolence for the family of Mona E. Yuninger