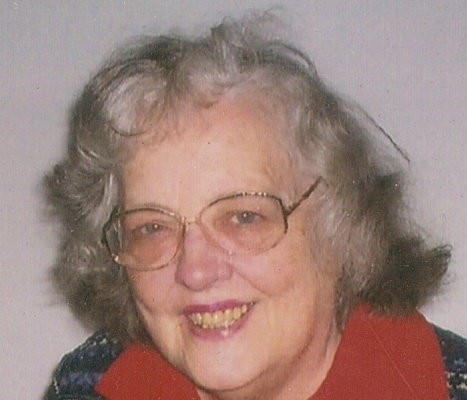 Mildred K. Henderson, age 91, of East Hempfield Township, completed the race set before her on Wednesday, June 29, 2022 at Brethren Village, Lititz, and now will be singing in the choir of the church triumphant.

Born May 7, 1931 in Philadelphia to Valdemar and Mildred (Buckley) Klammer, Mildred was the elder by 11 minutes of twin girls, and later in life, great-grandmother of twin girls.  Besides her parents, she was predeceased by her beloved husband, William G Henderson in 2002, and her precious teenage son, Thomas McNeir Henderson, as well as her brother, William V Klammer.

Salutatorian of her high school class in Haddonfield, New Jersey, Mildred then attended art school in Philadelphia for 2 ½ years until marrying and moving to Lancaster.  Her favorite joke, on leaving art school to get married, was that she “put the heart before the course”.  She worked as a secretary at F&M College until her first baby arrived, after which they moved to East Hempfield Twp.  When her youngest child began school, she started going to Millersville State College (now Millersville University) where she earned a degree in English, with honors, in 1980, and then worked briefly at another clerical job at the college.

Unable to drive until in her 40s, she was a prototypical “trapped housewife” but found many ways to keep busy, especially when her husband was away on his many trips for RCA, often overseas for extended periods.  She also enjoyed sewing, crocheting, and sometimes knitting.

In the late 1960s, she had the chance to achieve a lifelong wish to have her own little magazine, which ultimately developed into a literary magazine, “Hob Nob”, with contributions from writers and poets from all over the world.  This she continued until 1997.  After her husband began living in a nursing home in 1998, she began another newsletter for members of the Lancaster County Life Story Writers group; she did this for 20 years.  She also wrote and published her own autobiography in 2015, after 17 years of working on it.  She and her husband celebrated their 50th anniversary in 2001 with a family party.

Originally a member of St James Episcopal Church in Lancaster, in 1970 she became a member of First United Methodist Church, Lancaster, where she was very active, serving on the Library Committee, the Archive and History Committees, Chancel Choir for 45 years, Wesley Handbell Choir for nearly 30 years, and United Methodist Women, among many others.  She helped to make many quilts and apple pies for UMW.

A 50+ year member of Donegal Chapter, Daughters of the American Revolution, she was the descendent of early colonists in Virginia, as well as a Revolutionary war soldier.

Another favorite hobby of hers was writing limericks, and she used to send out new ones every year with her Christmas cards.  She also bombarded the local newspaper with letters and had many “I Know a Story” items published over the years.  Every day she did the puzzles in the newspaper.  Years ago she used to develop puzzles herself which she sold to various puzzle magazines.

In her retirement years, she did a great deal of traveling with her twin sister, including to such places as China and Australia, many times to Europe, and to all but four of the states.

She looked forward to being reunited with her loved ones who had gone on before, but particularly with her son Thomas, whose death 9 days after his high school graduation was such a tragedy.  She always wondered what this very talented young man could have done with his life to help mankind.  She and her husband were members of Compassionate Friends, a support group for bereaved parents.

Friends and relatives are respectfully invited to a Funeral Service on Thursday, July 7, 2022 at First United Methodist Church, 29 E Walnut St, Lancaster, PA 17602 at 10 AM. A viewing will be held from 9 AM until the time of service. Interment will be held in Laurel Hill Memorial Gardens.

Contributions in her memory may be directed to First United Methodist Church at the address above.

Offer Condolence for the family of Mildred K. Henderson