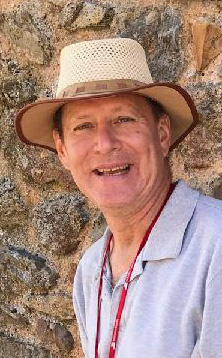 On Wednesday morning, February 17, after a valiant struggle with cancer, Dr. Michael S. Billig, Professor of Anthropology at Franklin & Marshall College, passed away at the Johns Hopkins Kimmel Cancer Center in Baltimore, at the age of 64. Michael was born in New York City on April 7, 1956, the son of the late Arnie and Adele Billig. He was the devoted husband of Heidi Wolf of Lancaster; the loving father of Monica Billig of Denver, and Shira Billig of Los Angeles; and the proud grandfather of Daphne Simone and Seth Michael Avery. Seth was born in Los Angeles two days before Michael passed away.

Encountering several complications following the early January transplant, Michael spent much of January and early February in the Center’s Intensive Care Unit, where because of COVID-19, his adoring wife Heidi was the only person who could visit him. As his condition worsened last week, Heidi was by his side as he took his final breath, as his heart beat for the last time and his beautiful light was extinguished.

Michael was born in Queens, a surprise brother to two older sisters. When he was young, his family moved to Rockaway, where he attended school and took up fencing. After graduating from Far Rockaway High School, Michael was awarded a fencing scholarship to attend Columbia University, an institution that might have been out of reach had it not been for his fencing prowess.

Columbia’s famous core curriculum nurtured his love of learning and set him on his path to academia. Passionate about many fields of study, Michael declared seven different majors as an undergraduate—including two in one day—before discovering anthropology, the field in which he would spend his career. It was during a visit to the American Museum of Natural History that Michael made his decision to become an anthropologist.

Michael received his B.A. from Columbia in 1976, and stayed on for graduate work. He earned an M.A. in anthropology from Columbia in 1979, before moving to Harvard University to pursue a Ph.D. in anthropology. There he studied under Peter Ellison, writing a dissertation comparing the effects of demographic constraints on marriage in two states in India. In 1986, as he was completing his Ph.D. at Harvard, Michael was hired to teach in the F&M Department of Anthropology. He completed his Ph.D. in 1987.

F&M and Michael were a perfect match. He flourished in the Department of Anthropology, and poured his heart into the program, willingly taking on the department’s chairship and any other duty for which he was called by the department and the College. Michael’s enthusiasm and sense of duty to the department and F&M inspired and instilled the same dedication in his colleagues. An enthusiast for College rituals, he reveled in the pomp and circumstance of College events, even memorizing the F&M Alma Mater.

In addition to serving as department chair several times, Michael served as chair of the Asian Studies Program from 1988 to 1991, and President of the F&M Chapter of the American Association of University Professors in 1996-97. He was the Associate Dean of the Faculty from 2011 to 2014, and was elected by his peers to serve on the College’s Professional Standards Committee. In 2020, as chair of the Faculty Council, he helped lead the College through the disruptive effects of the pandemic.

In 1990, Michael began a research project in the Philippines, centered on the sugar-producing island of Negros. This project, Michael’s research focus for the next twelve years, dealt with how the sugar industry exemplifies the transition from a colonial economy controlled by rural agrarian elites to one dominated by urban-based industrial, commercial, and financial elites. In 1993, Michael received a Fulbright Award to spend a sabbatical year in the Philippines, furthering his research and leading to the publication of his influential 2003 book, Barons, Brokers, and Buyers: The Institutions and Cultures of Philippine Sugar.

Although Michael was an excellent scholar, his passion always lay in the teaching and mentoring of students, where he was without equal. As his colleagues in the Department of Anthropology wrote so eloquently last week: “His star shone brightly in the classroom. Countless students remember his intellect and passion, his curiosity and fire. Former students from decades ago still recall his ideas, word-for-word, his voice pushing them today to think critically and with empathy. Michael connected with his students on an individual level. Many remember spending hours with him in his beloved Gerhart House office, working to improve an argument, develop an idea, clarify a thesis, and understand a theory. Many also remember countless hours in that same office talking about life, about hardship, about loss. Not to be held back by anything, Michael continued teaching, mentoring, and guiding us even while hospitalized during his recent battle with cancer. Michael was family to his students and colleagues.”

Michael regularly taught a wide variety of classes, including Introduction to Social Anthropology, Population, Anthropology of Wealth and Poverty, Transitions to Capitalism, Class and Culture, and Modernity. In recognition of his outstanding contributions to the curriculum and as a classroom instructor, Michael received F&M’s highest award for teaching, the Lindback Award for Distinguished Teaching in 2006.

Michael wrote more than twenty scholarly articles and reviews, and delivered more than thirty-five public lectures. His recent research efforts were focused on the transition currently happening among the Lancaster County Amish, in which an increasingly large number of Amish are making their primary living from non-agricultural activities, causing profound effects on Amish economy and culture. At the time of his death, Michael was in the process of writing a book on this topic.

But there was more to Michael than academia. He was a man of numerous and varied interests. He discovered opera at Columbia, becoming an expert on the many composers, plots, and singers. He also loved folk music, and with Heidi, hosted house concerts by visiting performers. He played the guitar, race-walked, wrote letters to the editor, fished, and religiously completed the New York Times Sunday crossword puzzle—with a pen. He and Heidi owned a vacation home on the Maine coast, where they loved to spend as much time as they could afford to spare. With Heidi, he hosted numerous pool parties and crab feasts at their Lancaster home, and invited many international F&M students to holiday meals. He was a fan of the Phillies and the Jets, sadly sticking with them even when they underperformed. Most of all, he loved spending time with his family, but especially with Heidi and their dog Sophie.

Michael will be sorely missed by his loving wife Heidi, his adoring extended family, his many friends, his academic colleagues, his students, and his neighbors, all of whom were fortunate to have known him. In whatever role one encountered Michael, one could count on his sincere desire to connect, his caring friendship, his eagerness to help with anything he could, and his wonderful sense of humor and playfulness. He was down-to-earth and larger-than-life at the same time. His absence will be deeply felt by all who knew him.

Michael is survived by his wife Heidi, his sisters Ronda and Melinda, his daughter Shira and son-in-law David, his daughter Monica, his grandchildren Daphne and Seth, and a large extended family.

The family will host a Zoom funeral in the next few weeks. Michael will be cremated and, as soon as COVID-19 allows, his ashes will be spread at Pemaquid Point in Maine, where he and Heidi were married.

Anyone who so wishes is encouraged to make a donation in Michael’s name to the American Museum of Natural History, the Metropolitan Opera House, or the Lymphoma and Leukemia Society.

Offer Condolence for the family of Michael Billig