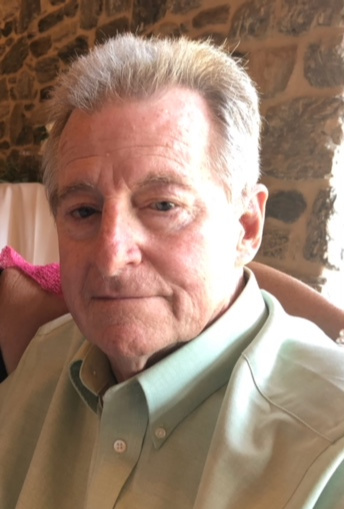 Melvin “Mel” David Ruth, 82, of Lancaster, PA passed away peacefully on September 15, 2019 at Moravian Manor Retirement home in Lititz, PA with his devoted wife by his side. Born in Lancaster, he was the husband of Barbara A. Mayo Ruth for 60 years. He was the son of the late Melvin David Ruth senior and Catherine Zecher Ruth.

Mel attended McCaskey high school and later served in the United States Navy in Guantanamo Bay Cuba from 1954 to 1957 as a firefighter. As a young man Melvin worked at DeWalt Black & Decker for 35 years. He also worked at Hertz Rent -A -Car, Unisource, and most recently worked at the Fulton Bank as a courier.

Mel also trained many young athletes at the Young Men’s Christian Association (YMCA), and the Lancaster County Racquetball Club. Melvin spent 42 years volunteering at McCaskey High School as the athletic weight trainer. He will always be remembered as the guy on the McCaskey sidelines in shorts on brisk (even freezing) fall nights as he cheered on the Red Tornados. Mel helped to establish the Mr. Lancaster Powerlifting and bodybuilding weightlifting competition. Mel was a former Mr. Lancaster winner in 1960, 1961 and 1970, and placed third in the Mr. Pennsylvania body building competition.

Melvin has amassed many service awards for his commitment and dedication to the weightlifting sport and youth in the Lancaster County area. In 2010 he was awarded the James “Jimmy” Sheckerd Meritorious Community Service award, in 2009 he was awarded the Lancaster County Old Timers J. Freeland Chryst Annual Sports achievement award.  In 2007 he earned the Lifetime Achievement award for his dedication to the weightlifting community of Lancaster County. The Susquehanna Valley Chapter Pennsylvania Sports Hall of Fame was awarded in 2006 for powerlifting and weight training. And in 2003, Mel was inducted into the McCaskey High School Athletic Hall of Fame for his dedication to the McCaskey Tornado Football team. Mel was noted to be more than a “trainer” but a believer and wholehearted encourager of the underprivileged youth.

He was an avid runner of the Red Rose Race and later when he could no longer compete or run the race, he was looked for by many to be at the 1 mile mark encouraging other runners on. One of Mel’s most challenging competitions was that of Stage IIIB lung cancer which he successfully beat in 1999.

Most of all, Mel enjoyed being with his wife and family at backyard picnics with his egg toss throws and going to Rehoboth beach with his family. One of the nightly events everyone enjoyed was indulging in ice cream at the Royal Treat. He spent many years assisting his grandsons at Penn Manor football games and attending his grand children’s sporting and high school events.

Surviving besides his wife, are his four children Lisa A. Ruth-Sahd, wife of Frank Sahd, Tina Schmalhofer wife of Kevin Schmalhofer, Melvin David Ruth husband of Diane Stern Ruth, and Tonya Legenstein wife of Tony Legenstein. He is survived by ten grandchildren -Kaitlyn Sahd Brown (wife of Andrew), Austin, Adam, Jordan, Ethan, Kylee Schober (wife of Stephen), Allison, Logan, Olivia and Noah, one step granddaughter Kahlia Brown and one very recent (2 week old) great granddaughter Rayna Brown who he didn’t have the opportunity to meet. He is also survived by cousins Doug, Frank and Barry Zecher and by a sister-in-law Sandra Mayo. He was preceded in death by a brother-in-law Charles Anthony Mayo.

Mel will be remembered as a gentleman, a friendly, kind, hard-working and humble man who lived a simple life. He will also be remembered for his kindness and devotion to his family and willingness to help youth athletes.

The family would like to express their sincere gratitude and appreciation to the staff at Moravian Manor Retirement Community for their dedication to his exceptional care and love over the last year and a half.

A visitation will be held at St. John Neumann Catholic Church, 601 E Delp Rd, Lancaster, PA 17601 on Wednesday, September 25, 2019 from 9:00 am to 11:00 am followed by a Celebration of Life at 11:00 AM.  Private interment will be held on November sixth, which is Mel’s birthday, in Indiantown Gap National Cemetery.

In lieu of flowers, the family asks for donations in Mel’s name may be made to the Lancaster YMCA, the American Cancer Society or to the Michael J. Fox Parkinson’s Foundation, P.O. Box 5014 Hagerstown, MD 21741-5014. For condolences to the family visit. www.DeBordSnyder.com

Offer Condolence for the family of Melvin “Mel” David Ruth