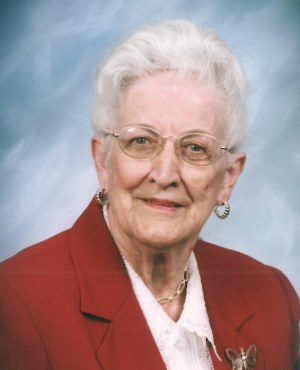 Mary S. Rineer, 95, died Sunday, July 26, 2015 at Quarryville Presbyterian Retirement Community.  She was the wife of the late David M. “Buzz” Rineer. They celebrated their 70th anniversary in April 2014, before he passed away in November.

Born in Lancaster, PA she was the daughter of the late Clarence and Mary (Herr) Stetter.

Though Mary spent much of her career as a homemaker, she worked ten years as a secretary to help send both of her children to college. Though an all-around excellent cook, she will be remembered for her signature dish–the Fuzzy Navel cake–which was as much fun to watch being made as it was to eat.

In her spare time she enjoyed bowling, reading and spending time with family. She was the family poet and commemorated life’s moments with heartfelt and clever verse. Even into her eighties she and Buzz were committed to service; they spent much of their free time transporting and visiting with older people who had lost mobility. Her Atkins Avenue Fourth of July parties were the stuff of family legend.

Mary was a member of Redeemer Lutheran Church as well as the Auxiliary Marine Corps League.

Relatives and friends are invited to attend Mary’s Celebration of Life Memorial Service on Tuesday, August 4, 2015 at 11:00 AM at Redeemer Lutheran Church, 500 Pearl Street, Lancaster, PA. The family will greet friends at the church on Tuesday from 10:00 AM until the time of service. Interment will take place at Riverview Burial Park. In lieu of flowers, memorial contributions in Mary’s name may be sent to Redeemer Lutheran Church, 500 Pearl Street, Lancaster, PA 17603.

Offer Condolence for the family of Mary S. Rineer