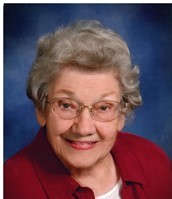 Mary Louise Habecker Shelton died June 16th, 2016.  Mary Lou was born February 4th, 1919, the first child of John S. and A. Mary Habecker, and she was raised on their farm on Spring Valley Road outside of Rohrerstown.

She was a graduate of East Hempfield High School and completed studies in Secretarial Science at Catawba College, North Carolina.  Initially employed by the U.S. Department of Agriculture Office in Lancaster, she relocated to Washington DC at the beginning of World War II, and was employed in the Office of South American Affairs in the U.S. Department of State.  While in Washington she met her husband of 40 years, William P. Shelton.  Although he was in the U.S. Army Quartermaster Corps at the time, he later volunteered for the U.S. Army Air Corps and they were married on Valentine’s Day, 1944 in San Francisco just before he departed for the Pacific Theater as a B-24 Flight Engineer.

Following the war, she and her husband raised three children on the home they had built on a corner of the Habecker farm. Primarily a homemaker in those early years, she also handled all the bookkeeping for her husband’s contract heating repair service business.  After her children were grown, she worked at Hager’s Department Store, was an active volunteer at the Wheatland gift shop, and later also at Lancashire Hall during and for several years following her husband’s declining months.

She was a friend to all with a socially engaging spirit, active in the Lancaster County Farm Women and the Donegal Chapter of the Daughters of the American Revolution.  Also a long time member of a number of card clubs, her latest passion was playing Rummy Cube with her friends at the Mennonite Home.

She is predeceased by her husband, William P. Shelton, and her two brothers, John D. Habecker and Kenneth H. Habecker.  She is survived by her two sisters, Susanne H. Wiest and Shirley M. Ranck, and her three children – son, David, and twin daughters, Lynne and Leslie.

There will be a memorial service at 10:30 AM Friday July 1, 2016 at the Mennonite Home Chapel, 1520 Harrisburg Pike, Lancaster PA, with family visitation prior to the service beginning at 9:30.  Interment will be in the Rohrerstown Mennonite Cemetery at the convenience of the family.  In lieu of flowers, donations may be made to the Salem United Church of Christ, 2312 Marietta Ave., Lancaster, PA 17603, or a charity of choice.

Offer Condolence for the family of Mary Louise Habecker Shelton