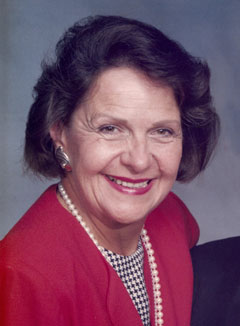 Mary Lou was a 1951 graduate of Upper Leacock High School and attended Kutztown State Teachers College. She was an employment recruiter for many years before working at Franklin and Marshall College, first in the business office and then at the North Museum, retiring in 1993.

Mary Lou loved traveling the world, meeting new people, and venturing “off the beaten path” to enjoy the beauty of nature and animal habitats. Her many journeys included trips to Africa, Antarctica, Europe, Southeast Asia, various points throughout North and South America, and the arctic region. Closer to home, Mary Lou was an avid gardener and enjoyed summers at the shore with family. She was also a generous supporter of several conservation, arts, and health organizations, as well as local educational institutions.

Surviving are five children, Mary Lee married to Eugene H. Steffy of Lancaster, Larry W. Knowlton of Lancaster, James R. Knowlton of Bloomington, IN, William B. Knowlton of Woodland Hills, CA, Barbara Knowlton-Phillips married to P. Todd Phillips of Morgantown, W. VA, and five granddaughters and two great grandsons. Also surviving are a sister, Grace M. Buckwalter, a nephew and a niece, all of Lancaster. She was predeceased by her younger sister, Joan M. Mowbray.

Relatives and friends are invited to attend Mary Lou’s memorial service at the Nevin Chapel, in the Old Main building on the campus of Franklin and Marshall College, College Ave. and James St. Lancaster, PA, on Saturday, September 3 at 11:00 AM. There will be a reception afterwards in the Steinman College Center (2nd Floor). In lieu of flowers, memorial contributions may be made in Mary Lou’s name to Hospice of Lancaster County.

Offer Condolence for the family of Mary Lou M. Shenk