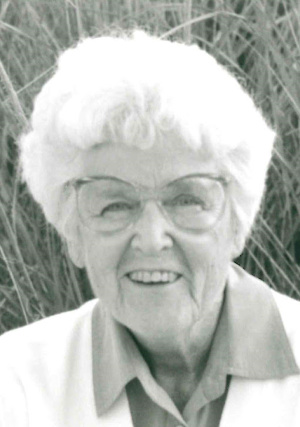 Mary Hammers Duvel, 103, died peacefully in her sleep on Thursday, November 28, 2019, at her residence in the Mennonite Home in Lancaster, PA. Mary was born on June 8, 1916 in Washington, DC to the late William S. Hammers and Sadie Hartz Hammers. She was married to William August Duvel, who passed away in 1965. She was also preceded in death by her twin sister Margaret Hammers Stevenson, and her brothers, William S. Hammers, Jr. and David H. Hammers.

Mary attended public schools in Washington, DC and graduated from Hood College, Frederick, MD, in 1938, with a B.A. degree in Home Economics. She married in 1939 and began a family that eventually included eight children. After stints in Boston, Chicago, Michigan, New York City, and Washington, DC, in 1950 she and her family settled down in Port Washington, New York. Mary was a stay-at-home mom who made family her top priority even after her husband died suddenly in 1965, when she was just 49, and she became a single mom with four children still at home. In 1971 she moved to St. Petersburg, FL with her two youngest children, partly to be near her elderly widowed mother, but also to enjoy the favorable southern weather. She lived in Florida until 1994 when she moved to an independent-living apartment at Woodcrest Villa in Lancaster, PA. In 2013 she moved to assisted living in the Mennonite Home.

Mary was a very friendly and outgoing person with a smile and good word for everyone, a warm personality, and fine sense of humor. Wherever she lived, she was an active member of the local Presbyterian or Methodist church, particularly the women’s service groups. Without evangelism or fanfare, she quietly lived her life following the guideposts of Christianity. She exemplified the virtues of humility, selflessness, generosity, kindness, caring, helping others, honesty, good behavior and integrity. She always looked for ways to be of service to other people. Additionally, Mary was curious about the world around her and had a great sense of adventure. She loved exploratory road trips to see the countryside, discover new sights, undertake new adventures, visit old friends, and connect with distant relatives.

A memorial service will be held on Friday, December 6, 2019, at the Pine Grove Church, 1194 Reading Road, Bowmansville, PA at 11:00 AM with a viewing from 10 AM until time of service. Interment in Caernarvon Cemetery, Morgantown, PA will be at the convenience of the family.

In lieu of flowers, contributions in Mary’s memory may be made to The Hood Fund (Unrestricted) at Hood College, Office of Institutional Advancement, 401 Rosemont Avenue, Frederick, MD 21701 or online at https://secure.hood.edu/makeagift.

Offer Condolence for the family of Mary H. Duvel