You are here: Home / Obituaries / Martin B. Strickler, Jr. 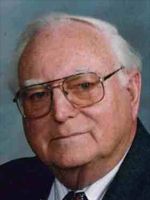 Born in Lancaster, Mr. Strickler was the son of the late Martin B. and Katherine G. Bard Strickler.

He was a graduate of the former Landisville High School.

He served his country proudly as a World War II veteran of The United States Army Air Corp where he served in the 361st Fighter Group and the 375th Fighter Squadron.  In 1943, he shipped out from Langley Field, VA to cross the seas on the Queen Elizabeth, to work on P47 Thunderbolts, arriving in Bottisham, England in November, 1943.

Affectionately known as Staff Sargent “Strick,” he began working on P51 Mustangs in 1944.  He was awarded a Bronze Star in recognition for his plane, which he proudly named “Christine”, serving 126 combat missions with no aborts.  Upon leaving Bottisham, his squadron was moved to Belgium in late February, 1945 through April 1945.  While in Belgium and England, he recalled how he could hear the B17’s dropping bombs on the towns under Hitler’s order. He served the remainder of his tour of duty in Bottisham, returning to the States in the fall of 1945 at which time he married his best friend and high school sweetheart M. Christine Hershey whom he remained married to for 68 years.

Martin was the owner of M. Strickler, Jr., Inc. as a wholesale fuel oil distributor, retiring on October 15, 2005 after 50 years of business.  During his working years, he was the proud recipient of the Esso Award for 10 years of service in 1964; Service Awards from Exxon for 25 years and 30 years of service.  During his career, he worked with Silver Spring Fire Co., providing gas to the fire trucks and earning a Life Member Award for appreciation of his service.  In 1970, Energy magazine, published by Humble Oil and Refining Company, published an article in recognition of “Marty’s” Good Samaritan acts and of his excellent business practices.

During his younger years, Martin was a member of the Marietta Mountain Boys along with several of his cousins, winning many 1st prizes.  He loved sports, was an avid Penn State and NASCAR fan.  He was also a continuing sponsor to Kreider Racing.  He loved going to auctions, collecting clocks and antique glassware, especially little “salts” and as many know, cars which were his passion.

His love of God and his church were never ending.  He was a long time member of Salem United Church of Christ, Rohrerstown.  Over the years there he served as usher, treasurer and committee of trustees.

His greatest love was his family by whose account, no better husband, father, brother, uncle, grandfather, great-grandfather could have ever been asked for.

Relatives and friends are respectfully invited to attend a funeral in DeBord Snyder Funeral Home, 2024 Marietta Ave., Lancaster, PA on Friday, May 22, 2015 at 11:00 a.m. with Chaplain Miriam Cruz officiating.  Friends may call at the funeral home on Friday from 10:00 a.m. until the time of service.  Interment will be private and held at the convenience of the family in Silver Spring Cemetery.

Offer Condolence for the family of Martin B. Strickler, Jr.