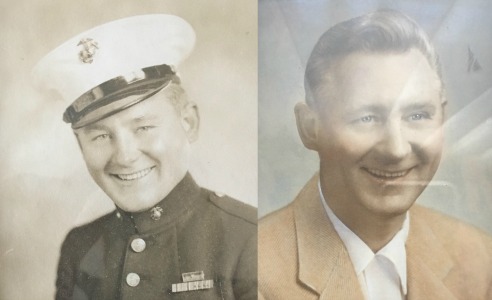 Born in Lebanon, he was the second youngest of 14 children born to John and Emma (Barshinger) Groft. A graduate of Lebanon High School, Marlin worked for the Civilian Conservation Corps where he assisted in the construction of the 14th Street Bridge over the Potomac River in Washington, DC. He then went to work as a silk screen operator for a textile plant.

Marlin enlisted in the U. S. Marine Corps at Stahr Armory in Lancaster shortly after Pearl Harbor and volunteered for the 1st Marine Raider Battalion, the famed Edson’s Raiders. As a Raider, Marlin first saw combat on Tulagi when his unit became the first American troops in either Europe or the Pacific to go on the offensive against the Axis forces. Later on Guadalcanal, Marlin’s unit held a hill known as Bloody Ridge for three days and two nights against overwhelming Japanese forces. The fighting was often hand-to-hand. Their valiant defense of the crucial hill saved the Guadalcanal operation – a turning point in the Pacific Theater.

Marlin also saw action on New Georgia where he and his comrades fought both the Japanese and the harsh jungle conditions of mud, pests, and disease. After the disbanding of the Raiders by the Marines, Marlin served briefly with the military police for the 29th Marine Regiment before being assigned to King Company, 3rd Battalion, 22nd Regiment where, as a sergeant, he became a squad leader. When the war ended he was preparing for the invasion of Japan.

After the war, Marlin’s unit spent six months in China before shipping home. There they took part in the surrender of thousands of Japanese soldiers. He left the Marines briefly but re-enlisted and became a drill instructor at Parris Island, S.C. He also was a sergeant in charge of the yacht basin in Guantanamo, Cuba. Marlin left the Marines for good in 1951 after 10 years of service.

After the war he worked as an experimental tool maker for RCA in Lancaster, retiring in 1985.  He worked on power tubes as part of the Apollo Program. Some of these power tubes remain on the moon to this day.

During his long, colorful life, Marlin was a champion military boxer, a champion pipe smoker, avid fly fisherman, Civil War scholar, devoted fan of Abraham Lincoln, a baker, golfer, gardener, lover of classic poetry (much he could recite from memory), devout Christian, and story-teller extraordinaire. Recently, he penned his memoirs in the book Bloody Ridge and Beyond.

Marlin frequently attended Raider reunions at Quantico, VA. In 2002, he returned to Guadalcanal and Tulagi on the 60th anniversary of those battles, escorted by his son Eric.

He lived considerably longer than his Commanding Officer Colonel Merritt Edson had predicted. The night before the Battle of Bloody Ridge, Colonel Edson predicted that many in this courageous group of 18 and 19-year-olds would not survive the battle. Even less would survive to the age of thirty. “Whitey” defied all odds.

Relatives and friends are respectfully invited to attend a funeral service at DeBord Snyder Funeral Home & Crematory, 141 E. Orange St., Lancaster, PA 17602 on Saturday, January 27, 2018, at 11:30 AM with Rev. William Massey officiating. A visitation will be held on Saturday from 10:30 until the time of service.  Interment will follow the funeral at Riverview Burial Park with full military honors.  At this time, a memorial fund has not yet been established, however the family is in the process of establishing the Marlin F. “Whitey” Groft Memorial Fund for the maintenance of the Edson’s Raiders Memorial at Quantico National Cemetery in Triangle, Virginia.  To leave an online condolence for the family please visit:  www.DeBordSnyder.com

Offer Condolence for the family of Marlin F. “Whitey” Groft