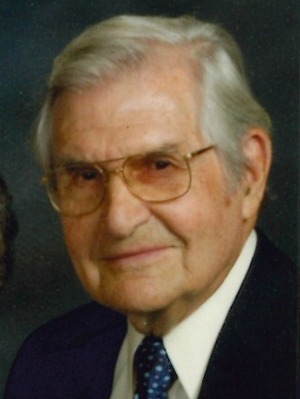 E. Mark Weaver, 97, died peacefully on Wednesday, March 29th, at Willow Valley Retirement Community’s Arbor View following a brief illness. Mark was preceded in death by his wife, Thelma, after a long, loving marriage of 76 years. He is survived by his half-sister, Rita, wife of Charles Leist of Bradenton, Florida; his 4 children: Kathleen J., wife of Robert Bucher of Willow Street; Philip M. Weaver of New Holland; David A. Weaver and his wife, Alice, of Quarryville; Linda J., wife of Robert Simpson of Lancaster; his 7 grandchildren and 3 great-grandchildren; and many nieces and nephews.

Mark was born in East Petersburg, the son of Elam and Fannie Weaver. He was preceded in death by his 4 siblings, S. Clyde Weaver, J. Norman Weaver, S. Mae Gingrich, and E. Jean Wine; a stepsister, Catherine (Frantz) Keeney; and a foster sister, Barbara Burkhart. Working for his brother at S. Clyde Weaver Smoked Meats & Cheese, Mark spent his earlier years behind the meat and cheese counters at various markets in the area. Following his marriage to Thelma (who he met at Elizabethtown College) in 1940, Mark decided to attended dental school. He graduated from Temple University in 1947 and went on to serve as a dentist (with the rank of captain) in the U.S. Airforce at Langley Air Force Base, moving his family to Newport News, Virginia, from 1954 to 1957. He then started his own practice back in Pennsylvania (now Strasburg Dental Group), where he was a dentist for 50 years.

Mark was a member of the Lancaster Church of the Brethren and a former member of the Lancaster County Dental Society, the Hamilton Club, and Media Heights Golf Club. He and Thelma sang in the church choir and the Manchester Chorus for many years, and were avid golfers, travelers, and dancers. Mark also loved his cars and went on to restore a 1937 Buick, reminiscent of his very first car (the one in which he and Thelma had their first date), and his father-in-law’s 1964 Ford Galaxy. He loved showing them off in parades and on other special occasions.

Mark was kind, generous, and always aware of those in need, giving gifts to those who would otherwise have none, especially at Christmastime. Mark and Thelma also participated in the CARE-Medico program for a month in the 1960s to provide dental care to Hondurans who had no opportunity to see a dentist. He was a loving husband, father, grandfather, and great-grandfather. His family was always the priority in his life, and he will be sorely missed.

Relatives and friends are invited to attend a Memorial Service at The Lancaster Church of the Brethren, 1601 Sunset Ave., Lancaster, PA, 17601 on Friday, April 14, 2017 at 11:00 AM. The family will greet friends at the church following the service.  Private interment will be held at the convenience of the family.

In lieu of flowers, please consider making a contribution to The Lancaster Church of the Brethren Endowment Fund at the address listed above.  To leave an online condolence please visit:  www.DeBordSnyder.com

Offer Condolence for the family of E. Mark Weaver