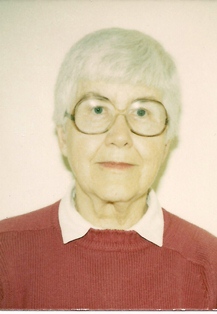 Marjorie Magnusson, 84, of the Mennonite Home, died Friday, December 23, 2011 at Lancaster General Hospital.
She had been married to Alan Magnusson for 62 years. Marge was born in Los Angeles, California on April 10, 1927, the daughter of the late Irving and Frances (Ellis) Finley. She grew up in Whittier, CA, and attended Whittier College where she earned an A.B. degree with a major in history and a minor in English. She married, taught for one year, and then retired to raise a family.
In California, Marge was active in the Presbyterian Church, Girl Scouts, and the American Association of University Women.
In 1961 the family moved to Lancaster, PA, where Alan was a chemist at Armstrong. Marge discovered the library training program at Millersville University, enrolled, and spent 19 years as an elementary school librarian in the Ephrata School District. Aside from being a librarian, she liked to garden, cook, hike, camp, swim and read. Their little spot in Maine was a bit of heaven for them both. This did not stop their traveling to other places however. Marge belonged to the First Presbyterian Church in Lancaster, American Library Association, the Pennsylvania Library Association, North Museum, the Nature Conservancy, and the Friendship Force of Lancaster. In later years her activity was limited by severe osteoporosis.
In addition to her husband, she is survived by a daughter, Nancy Magnusson of Ellicott City, MD; a son, Bruce Magnusson of Walla Walls, WA; and several nieces and nephews. She was preceded in death by a son, David who died in infancy.
A Memorial Service will be held on Thursday, December 29, 2011 at 2:00 P.M. at the First Presbyterian Church, 140 E. Orange St., Lancaster, PA. The family will greet friends following the service. Interment will be private in the Memorial Garden of First Presbyterian Church. Please omit flowers. If desired contributions in her memory may be made to the First Presbyterian Church, or to the Arthritis Foundation, 3544 N. Progress Ave., Suite 204, Harrisburg, PA 17110.

Offer Condolence for the family of Marjorie Magnusson