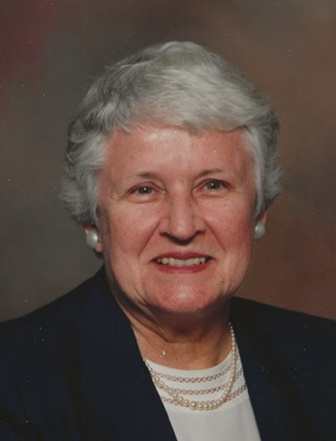 She was born August 30, 1920, in Philadelphia to Margaret Heilman McDaniel and William Anders McDaniel.  After graduating from Olney High School where she held many leadership positions, she undertook a program in business at Temple University School of Commerce.  There she achieved high honors and acquired skills that she deftly applied first to work in the office of then-registrar and later university president Millard Gladfelter and throughout her life in volunteer work with numerous charitable organizations.

In October 1942 she married Arthur M. Byers Jr., whom she had met at Olney Presbyterian Church.  The couple lived at officers’ training school in Durham NC until Arthur was sent to Europe by the Army.  Their first child, Elizabeth Jean (“Betsy”) was born while he was in Europe. Arthur enrolled in Princeton Seminary in 1947, their second child Ruth Anne was born, and they moved  to Wissinoming where Margaret became a pastor’s wife and David Arthur was born.  They moved to Princeton in 1953 when Arthur began a new job with the General Council of the Presbyterian Church in New York, and son John William was born.  In 1964 Arthur became secretary of Princeton Theological Seminary and they built a spacious home where Peg excelled in welcoming Seminary students and faculty as well as visitors from many countries.

In Princeton, Peg served as a volunteer leader for the Mercer County Department of Human Services Advisory Board, P.E.O. Sisterhood, the Present Day Club, Princeton YWCA, the Women’s Club of Princeton, the Princeton chapter of the Embroiderer’s Guild of America, and the Mercer County Extension Service. At First Presbyterian Church of Princeton (later Nassau Presbyterian), she served as an Elder-Trustee, a Deacon, a representative to the Princeton Interfaith Committee, President of the Women’s Association, and commissioner to the Presbytery of New Brunswick.

After she and Arthur moved to Willow Valley North in Lancaster in 1993, she established a volunteer program for residents who served as lobby receptionists and gave tours. She became the first president of the Willow Valley Group of P.E.O members who resided there.  She was a faithful member of the First Presbyterian Church of Lancaster for nearly 30 years and P.E.O. Chapter AK-PA. During her life she traveled across the USA mainland, to the British Isles, France, Germany, Austria, the Czech Republic, New Zealand, Australia, Canada, Hawaii and in the Caribbean. She was also a loyal Volvo owner and driver. Even into her one hundred and first year, she was spry with a keen memory and wit.

A graveside service will be held at the Princeton (NJ) Cemetery on Valentine’s Day, February 14, 2022. A virtual memorial service will take place soon.  In lieu of flowers, donations are encouraged to the YWCA Lancaster, 110 N. Lime St., Lancaster PA 17602 for its Kepler Hall renovation projects.

Offer Condolence for the family of Margaret “Peg” McDaniel Byers