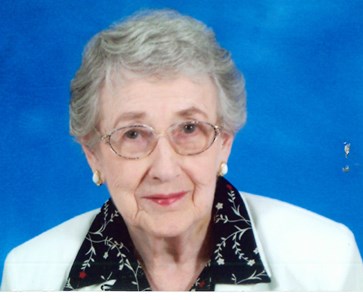 Margaret B. Kramer passed away due to natural causes on April 24, 2016 at the Glen in Willow Valley, Lancaster, PA. She was born on February 6, 1922 in Clarksburg, WV, and was the daughter of the late George and Ethel Brase.

She graduated from Washington Irving High School in Clarksburg, and from Stephens College in Columbia, MO. Her husband, William M. Kramer, died in September 2000, after 57 happy years of marriage.

In Clarksburg, she was a member of the First United Methodist Church, the Woman’s Club and the Clarksburg League for Service. Margaret worked as a Touring Counselor for the AAA Club until she and family moved to Lancaster in 1957. She became a member of Lancaster’s First United Methodist Church, the Towne Club, the University Club, and Chapter AK of PEO, a philanthropic educational organization for various scholarships for women.

She is survived by three sons, David, of Lancaster, Daniel, of Baltimore MD, and Jeff, of Edgewater, MD, and three daughters-in-law, Bonnie, of Lancaster, Sandi, of Tucson, AZ, and Lezlee, of Edgewater, MD. In addition, she is survived by four grandsons- Carl, Michael and Will Kramer, and Erik Grant, and two granddaughters- Karen Kramer and Alison Wioskowski. The surviving families also include eight great-grandchildren.

Relatives and friends are respectfully invited to a viewing at DeBord Snyder Funeral Home, 141 E. Orange St., Lancaster, PA on Friday, April 29, 2016 from 1:00-2:30 P.M.   Private interment will be held at the convenience of the family.

Offer Condolence for the family of Margaret E. Kramer