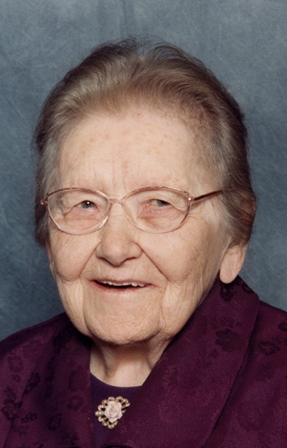 Mabel W. Mellinger, 101, a resident of Landis Homes, was called to her eternal home by her Lord and Savior on Tuesday, August 16, 2011.
She was the wife of the late William G. Mellinger who died in 1999. Born May 22, 1910 in East Lampeter Twp., she was the daughter of the late Jacob G. and Lizzie Burkhart Witmer.
Mrs. Mellinger was a homemaker and a charter member of the Neffsville Mennonite Church. Mabel also spent many years working at Central Market where she ended her market days working for Shutt’s Fudge. A highlight of her time spent at market was serving fudge to President George H.W. Bush and Governor Dick Thornburgh. Mabel volunteered at Lancaster General Hospital as a Gray Lady for 37 years and retired in 2000 with almost 6,000 hours of accumulated volunteer time. She enjoyed crocheting, raising violets and was known for her homemade apple dumplings and noodles.
Surviving is a son, William G., Jr. husband of Elizabeth Brubaker Mellinger of East Petersburg and their children, Melinda Hoin, Bill Mellinger III and Christina Beiler; two daughters, Anna wife of the late Ira L. Diller of Easton, and her children, Cynthia Keepers, Scott Diller and Lynette McKeever; and Dorothy wife of Donald High of Lancaster, and their children, Michael (Deceased) Lisa Clark, Marc High and Joel High; 22 great grandchildren; and two sisters, Ruth Griffith of Montana, and Miriam Harnish of Lancaster. She was preceded in death by four sisters, Esther Huber, Anna Stokes, Alice Peifer and Viola Mylin. The family would like to express their thanks to the staff of the Manheim House at Landis Homes for the wonderful care they provided to Mabel in the last days of her life.

Offer Condolence for the family of Mabel W. Mellinger