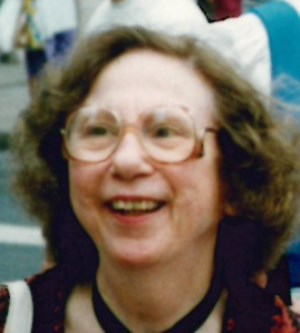 Louise Eleanor Wackernagel died September 9, 2015 at Lancashire Hall.  She was born in Lancaster on September 20, 1922 to Emily Wisegarver Wackernagel and the Rev. Frederick W. Wackernagel.

A life-long Lancastrian, she attended school here, graduating from Girls’ High.  She received her B.A. from Wittenberg University and returned to Millersville for her M.A. in English and journalism.

Elli, as she was known, worked at Armstrong Industries during WWII, and later at WGAL radio and T.V.  She was a Writer-in-Residence, and taught briefly at Millersville.  She retired from the Department of Education at M.U.

Also during WWII, Elli volunteered with the Civil Air Patrol; and later with NATO, including a 2 week working vacation in Europe with NATO.

She grew up in the Zion (German) Lutheran Church, where her father was pastor.  She was an active volunteer at St. Matthew Lutheran Church for many years.  There she did publicity for the church events, was lay leader, worked on altar care, and sang in the choir.  Elli also did publicity for the local chapter of A.A.R.P., volunteered in the chaplaincy office at Lancaster General Hospital, and belonged to the Optimist Club.

Elli was known for her sharp wit and fierce independence.  She was a published writer and an avid reader with a special interest in science fiction.  Besides her work with NATO, one of the high points of her life was her on-going written communication with C.S. Lewis’s brother Warren.  Elli had an abiding love for animals, and gave talks on the wolves of The Wolf Sanctuary at Elm.  She was also involved in local theater, Gaelic-American Society, Musica Sacra and the Leiderkranz (German-American society) chorus.

Elli is survived by 3 nieces, a nephew, a cousin and many friends.

In lieu of flowers, contributions may be made to an animal care organization of your choice.

Offer Condolence for the family of Louise Eleanor Wackernagel