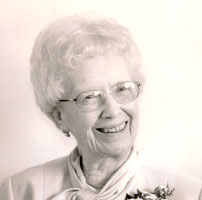 Born February 27, 1918 in Ravenna, Ohio, Louise was the only child of Joseph Bradford Hanan and Elsie Orlinda Shirtliff. She graduated from. Buchtel High School, Akron, OH, attended Flora Stone Mather College of Western Reserve University, and graduated from Kent State University with a B.A in Nutrition. During her years in Akron, she was an active volunteer with the Children’s Concert Society, the American Red Cross, and her churches, Westlawn Methodist & Christ United Methodist. Later years were spent in
Fairfield, IA; then York, PA, where she was a volunteer at York Hospital and a member of both P.E.O. and Welcome Wagon; and finally in Lancaster, PA, living 26 years at Homestead Village Retirement Center. There, she was active in P.E.O., Church of the Apostles, the Homestead Library Committee and Homestead Auxiliary until failing eyesight prevented this.

Offer Condolence for the family of Louise Arlene Hanan McCurdy