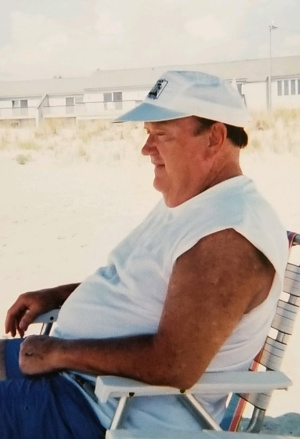 Louis M. “Spike” Kelley, 92, passed away peacefully on Monday, April 19, 2021 at his residence.  Born on March 24, 1929, in Port Vue, PA, Louis was the 13th child of James W. Kelley and Mary Ann McCaffery-Kelley.  He moved to McKeesport at the age of 10 and later received his diploma from McKeesport High School, class of 1948.  He proudly served in the US Navy from 1945 through 1949.  Following his discharge, he worked for US Steel for 30 years.  Upon retiring from US Steel, he worked for the International Union until his second retirement at the age of 74.  At the time of his retirement, he held the position as the Assistant Director in District 10, covering the state of PA.  He was an active member of Beulah Park Methodist Church, serving a number of groups including the Youth Group for many of years.  He was also a long-time member of the White Oak Lions Club and W.O.A.A.  He loved sports and served the community by coaching a number of teams including Basketball, Base Ball and Soft Ball teams.

Louis married his love, Nancy (Virag) Kelley on January 5, 1950 and they celebrated 53 years of marriage until her death on January 21, 2003 from pancreatic cancer.  Following Nancy’s death, Louis was blessed with a friend and partner, Laura Rain, with whom he spent almost 15 years until her death in October of 2019.

Louis is survived and cherished by: his son, Timothy Kelley; his daughter-in-law, Karen; his granddaughter Krystal Lui and husband Augusto; his grandson Sean Kelley and his wife Lindsay; 4 great-grandsons; Aidan, Ryan, Quinn and Preston; as well as a number of extended family members and friends, including the Anderson family of Lancaster.

He was preceded in death by his parents by the time he was 12, his 9 brothers and 3 sisters, his wife, Nancy (Virag) Kelley, his son, Craig Kelley (passed Dec. 2016) and friend, Laura Rain.

The family asks that in Louis’s honor, that donations be made to Pancreatic Cancer Research in lieu of flowers.

Offer Condolence for the family of Louis M. “Spike” Kelley