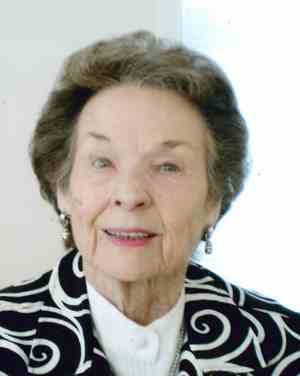 Lois Bohlin, a longtime resident of Lancaster, PA and Westfield, NJ passed away on February 22, 2017 after a short illness.

Born in Jefferson City, MO on October 25, 1929 to Roy and Ferne (Hiddleston) Taylor, Lois spent her early years growing up in the South. Her family moved to Lancaster, PA in 1940 where she met and later married Gilbert Bohlin, her husband of 49 years until his death in 2000.   Lois was a 1948 graduate of Manheim Township High School.

Moving their family to Westfield, NJ in 1969, Lois was employed by Ralph Libonati Co in Springfield, NJ from 1972-1987. Relocating back to Lancaster in 1995, Lois became an active member in Coterie Club and served as President from 1999-2000. She enjoyed playing bridge, reading, crossword puzzles, traveling and her numerous Doberman Pinchers. She was most proud of her daughters and grandchildren with whom she cherished spending time.

A Memorial Service will be held on Friday, March 10, at 11:00 AM at the First Presbyterian Church, 140 E. Orange St., Lancaster, PA with the Rev. Dr. Donald W. Hackett officiating. The family will greet friends following the service.  Interment will be private. In lieu of flowers, donations can be made in Mrs. Bohlin’s memory to Hospice and Community Care of Lancaster, 685 Good Drive, PO Box 4125, Lancaster, PA 17604-4125.

Offer Condolence for the family of Lois T. Bohlin