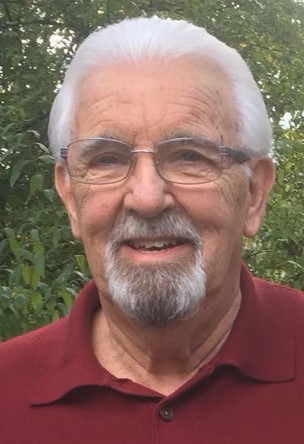 On March, 20, 2021 Larry Edward Battig crossed home plate for the final time on this earth before going to the big leagues in Heaven.  Born on December, 29, 1938 in a farmhouse in Congress, OH, Larry lived the majority of his life in Wooster, OH.   He was the son of Edward R. and Luella L. (Hofacker) Battig and the husband of Jean (Lapp) Battig for almost 41 years.  For many years he was a member of Church of the Savior, Wooster, OH.

Larry excelled in football, basketball, and track in high school. He finished state runner up in the pole vault. He later played softball at a national level well into his late 70’s. He served his country in the U.S. Army stationed in South Korea.  His enthusiastic and positive attitude served him well in his professional life as a wholesale grocery store salesman, realtor, and as a used car salesman with his company, Battig Motors and Tire Center.  Corvettes were his specialty.   When he retired from business he decided it was time to travel.   Larry and Jean spent the next 10 years in their RV exploring western US and working part time at federal parks and RV Resorts. They built many lasting friendships during their travel years.   In 2017 Larry and Jean moved to Lancaster, PA to be closer to Jean’s family.  Larry has finally ran out of gas as Alzheimer’s disease took its deadly toll.

Larry will be remembered fondly by many as a relaxing and fun person to be around, very athletic, rarely critical, enthusiastic, flexible, easy going, and always willing to lend a helping hand.  He was also known in Wooster as “Larry the Legend’ (Google) for his softball talent in his later years.  Uncle Larry  was greatly loved by his numerous nieces and nephews.

He is survived by a son Kurt E. Battig of Woodland Park, CO, wife Kelli, and grandchildren Karli and Rylie Battig, and Lars Preece.  In addition he is survived by a brother Don Battig (Sharon) of Wooster, OH, sisters, Joann Jolliff, Hoover, AL, and Jacqueline (Roosevelt) Scott, Ocala, FL, and Edward Battig II, Laramie, WY.  He was preceded in death by his sister Phyllis Barnes, brother in law Ross Barnes, brother in law Robert Jolliff, and his parents.

Services will be private and Larry has donated his body to science.   A special Thank You to Hospice of Lancaster for their excellent care during the past year.  In lieu of flowers please make contributions to Larry’s memory to Hospice and Community Care, 685 Good Drive, PO Box 4125, Lancaster, PA  17604-4125

Offer Condolence for the family of Larry Edward Battig