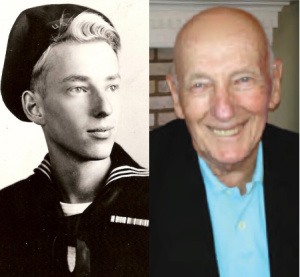 Kenneth Harner Fidler, 95, passed away at Moravian Manor in Lititz, PA on September 28, 2020.  He was born in Reading, PA, the younger of two sons to Burtin Raymond and Kathryn Yoder (Harner) Fidler.

Married in October 1949, Ken was a devoted husband to Mary Elizabeth McBride, who preceded him in death in 2009. He and Betty had 59 happy years of married life.  Ken loved to garden and play golf.  He was a great fan of the Phillies through their good times and their bad times, and he loved tracing his Fidler line back to the 1600’s in Germany and arrival in Berks County in the early 1700’s.

He is survived by his daughter Marybeth, son Kenneth Steven and Steven’s wife Nhung.  Raymond, Ken’s beloved older brother who looked out for him throughout his life, also preceded him in death.

A 1943 graduate of Reading High School, Ken was a Navy man in World War II and in the Korean Conflict.  He served aboard the USS Loy (DE 160/APD 56) in World War II and on the USS Wallace L. Lind (DD 703) in Korea.  He made arrangements for the first reunion of his USS Loy shipmates in Lancaster, PA in 1972 and faithfully attended many Loy reunions over the years.

“Memoirs of a Ping Jockey” was published in 2013 — a chronological telling of his early life, growing up in the Depression, Navy service, marrying the love of his life, and the birth of his children.  The book started as a Christmas tradition, with Ken giving his children written stories of his life one chapter at a time.  It then evolved into a published book, a website, two dozen podcasts, and many storytelling sessions with school children, retirees, fellow veterans and community friends.  Somehow in the telling he revealed a new dimension of himself, and he managed to help us all feel more connected to our lives and our loved ones.

Ken was a beloved and faithful member of Grandview United Methodist church for sixty years, as well as a member of the Historical Society of Berks County, the Tulpehocken Settlement Historical Society, and the American Legion.  His personal narrative, original photos and service history are in the Library of Congress Veterans History Project.

Ken learned the machinist trade at Textile Machine Works trade school, graduating from the Wyomissing Polytechnic Institute.  He worked eleven years at Textile as a machinist and as a machine erector building Reading Full-Fashion Knitting Machines, including a year onsite in Mexico City. Ken later worked eleven years at Schick Electric where he became a toolmaker and three years at Superior Mold, Inc. as a moldmaker.  He joined J. L. Clark in Lancaster as a toolmaker and retired as a supervisor after 20 years.

The family wishes to express their deepest gratitude to Ken’s Grandview United Methodist church community, which held him close for 60 years, and to the Moravian Manor staff family for their exceptional care over this last year.  Ken was a truly well-liked coworker, loved friend and beloved husband, father, brother and son.  We will all miss his joy, his laughter and his zest for life!

A Celebration of Life will be held on November 11, 2020 at 3 PM. To attend virtually please email mfidler1494@comcast.net to receive a link and details.  A private interment with military honors will be held at Indiantown Gap National Cemetery, where he will join his wife, Betty, in eternal peace.

Offer Condolence for the family of Kenneth Harner Fidler