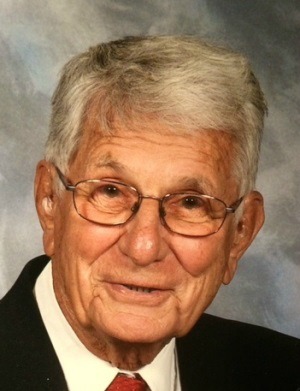 Kenneth Eugene Wolf, 94, of Lancaster passed away on Saturday, April 2, 2016 at the home of his son James C. Wolf.  He was a long time resident of Woodcrest Villa and prior to that lived at 564 Hamilton Street in Lancaster.  He was born in Lancaster and was the son of the late Herbert and Vera Wolf.  He was preceded in death by his wife Evelyn who passed away 11 years ago this month.

He was a graduate of Hempfield High School and Franklin and Marshall College.  He served in the US Army Air Corp in World War II during the North African, Sicilian and Italian campaigns.

He was employed by RCA Corporation where he was intimately involved with the development of the first color television.  Later, he worked for Gilbert Associates in Reading and Warfel Construction in Lancaster.

His favorite pastime was fishing.  He was scheduled to go fishing with his friend the day he died.  His laugh was his most endearing trait.  The halls of Woodcrest will be a little quieter with his passing.

He was preceded in death by his brothers, Herbert and William and infant sister Nancy.

Offer Condolence for the family of Kenneth E. Wolf