You are here: Home / Obituaries / Katherine B. “Kay” Troxell 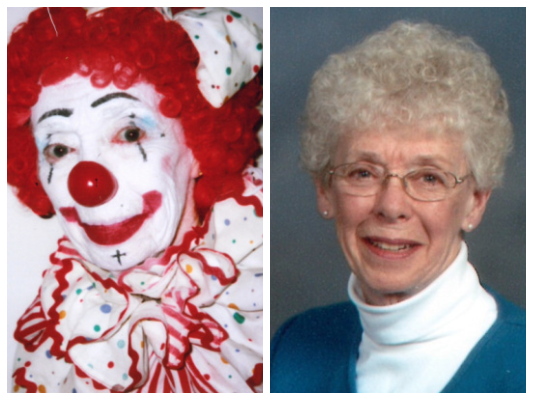 Katherine B. “Kay” Troxell, Lancaster, an area leader in sacred dance and Christian clown ministry passed away at home on Sunday, January 3, 2021. Born in Washington DC on October 28, 1926, she was the daughter of the late Marion Smith and Dorothy (Sweeney) Badollet. She was the wife of Robert Merrill Troxell, with whom she celebrated their 70th wedding anniversary in November.

As a liturgical dancer, choreographer, and workshop leader, she had been active since 1974 in introducing dance as an element of contemporary worship. Kay appeared as a soloist, a member of two dance trios and as a speaker-demonstrator in churches throughout south central Pennsylvania. She was the Editor of Resources in Sacred Dance, an Annotated Bibliography from Christian and Jewish Traditions published by the Sacred Dance Guild in 1986 and enlarged and revised in 1991. An article, “Lamb of God, a Dance of Lent” appeared in Modern Liturgy magazine.

Mrs. Troxell was a member of the national Sacred Dance Guild and served as Recording Secretary of the Board of Directors and as a member of the Board-at-Large from 1985-1989. She was the Chapter Representative of the Eastern PA area of the Guild for nine years. She was a guest lecturer on sacred dance at Franklin and Marshall College, Lancaster Theological Seminary, Harrisburg Area Community College, and led workshops for church schoolteachers and adult classes, youth groups, choir directors, church women’s associations, and the Parish Resource Center, Lancaster.

A member of First United Methodist Church, Lancaster, Kay served on worship planning committees both in her church and on Methodist District and Conference levels. She danced in worship services at annual meetings of the Eastern Pennsylvania Conference, United Methodist Church, as well as at a National Synod meeting of the United Church of Christ. She was a founding member, Secretary and Danceletter Editor of the Dance Council of Central Pennsylvania from 1978-1984.

In addition to her dance activities, Kay was the founder and director of “The Fools of Faith” Christian Clown ministry at her church. She began clowning in 1979 in her father’s nursing home and was active in clown ministry in hospitals and nursing centers, teaching at national conferences and area workshops.

She was a charter member of the Board of Directors and from 1986-88 served as Secretary of Phoenix Performing Arts Ministries. She was honored by that organization with the first annual Father Dave Mura Award for her contributions and loyalty to the ministries. Several of her articles on Christian clowning have been published in Phoenix Rising, the organization’s magazine. She was Community Arrangements Chair for the National Clown, Mime, Puppet and Dance Ministries Conference in 1983.

Kay served as charter member and secretary to the Spectrum Lay Advisory Committee, Lancaster Theological Seminary. She was a member of the Lancaster YWCA and in the 1960s was an officer in the YW Newcomer’s Club and Editor of the YWCA’s newsletter, “Lancaster Young Woman” from 1961-1967. She was member of the Public Relations Advisory Committee, Manheim Township School District in 1971.

Kay grew up in the Scotch Plains/Fanwood, New Jersey area and graduated from the Pennsylvania State University in 1948 with a degree in journalism. She was the Publications Manager for Carnegie Institute of Technology (Carnegie Mellon University) in Pittsburgh, 1948-1954.

Along with her husband, Kay is survived by a daughter, Merrill K. (Judi Skilton Horry), Charleston, SC, and a son, Robert B. (Diane Martin), Lititz, as well as 13 grandchildren and two great-grandchildren.

Kay’s interests were gardening, France and speaking French, and playing the piano-especially boogie woogie. A celebration of life service will be held at a later date. Details will be announced when plans are finalized.

In lieu of flowers, memorial contributions in remembrance of Katherine B. Troxell can be made to the Chesapeake Bay Foundation, www.cbf.org, or to Choice Books of Pennsylvania, 121 S. Main St. Manheim, PA 17545.  To leave an online condolence for the family, please visit: www.DeBordSnyder.com

Offer Condolence for the family of Katherine B. “Kay” Troxell