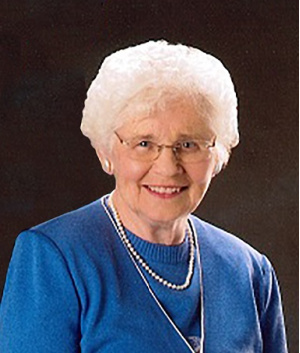 Josephine (Jo) Weiss, formerly of Sarasota, FL, passed away on October 9 at Landis Homes, Lititz, PA.  Jo was born and raised in Lock Haven, Pennsylvania, the daughter of William A. Berry and Beatrice Grier Berry.  She was predeceased by her husband, William (Bill) Weiss in October 2016. They shared 65 years of marriage filled with travel, unique experiences and wonderful memories.

The couple experienced many relocations over their 65 years, most recently from Chicago, Illinois to Sarasota, Florida.  They were both quite active in their church and in community organizations wherever they lived.

While in Chicago, Jo was a member of the Board of Directors of Chicago Child Care Society, serving as Vice President and Chair of the Nominating Committee.  She was a life member of the Child Care Board.  She also was a member and Vice Chairperson of the Adler Planetarium Board of Trustees, and a member of the Executive Committee.  She was on the Women’s Board of Northwestern University and served with the President’s Council of the Museum of Science and Industry.  She and her husband were active members of the Fourth Presbyterian Church of Chicago.

While living in Sarasota, she served with the Florida Center for Child and Family Development as a member of the Board of Directors and the Center’s Program Committee.  She was active with Chi Omega National Sorority.  She and her husband were active members of the First Presbyterian Church of Sarasota.

She and Bill were quite involved in educational philanthropy at several institutions, but particularly at their alma mater, Penn State, where they provided scholarships primarily for first generation college students.  Several hundred university and community college students received their degrees as a result of the support provided by the couple.  Jo also provided support for faculty at Penn State, establishing the Josephine B. Weiss Chair in the Humanities, as well as support for the University Library.

Jo always maintained her husband, children and grandchildren as the highest priority of her life, and she dedicated herself to their happiness, education and well-being with love and compassion.  Jo was the heart of the family.  She is survived by her sister, Beatrice Mellinger of State College, PA, three married children, daughter Susan (Ken) Miller of Lancaster, PA, sons David (Dorene) of Holly Springs, NC, and Steven (Mitzi) of Steamboat Springs, CO, as well as five grandchildren and 5 great grandchildren.

The family will have a small, private memorial service at DeBord Snyder Funeral Home and Crematory later this month.  Her final resting place will be with her husband at Fort Indiantown Gap at a date to be determined.

Offer Condolence for the family of Josephine (Jo) Weiss