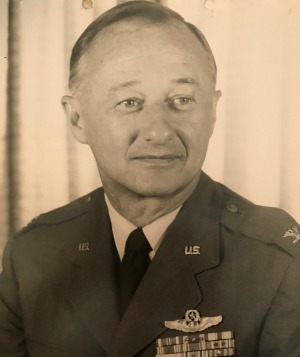 John J. Collins, “Jack,” of Lancaster, PA, passed away on Wednesday, October 17, 2018, at the Glen at Willow Valley, after just celebrating his 98th birthday last week. He was the loving husband of B. June Collins, with whom he shared 76 wonderful years.

Born in Reading, PA, Jack graduated from Wyomissing High School and went on to study at Franklin and Marshall College. After completing two years there, he was accepted for the Aviation Cadet Program for pilot training. Primary training was at Coleman, Texas, Basic training at Randolph Field, Texas (then known as the West Point of The Air Force), and then on to Kelly Field, where he received his wings and was commissioned a Second Lieutenant.

Jack began his flying career in Lancaster and received his private flying license at the age of 18 under the efforts of Dick Bomberger and Jesse Jones. During Jack’s flying career, he amassed some 10,000 flying hours and was qualified in some 25 different aircraft ranging from the J-2 Piper Cub to the 10 engine B-36. Jack was also jet qualified, flying T-33’s and F-80’s.

Jack held many key positions in The Air Force from Base Commander to a Pentagon assignment with the Inspector General.

After retirement, John went to work with Rorer Pharmaceutical Co. for fifteen years as Special Assistant to the Senior Vice President for Governmental Affairs and later on as Director of Engineering.

Surviving besides his wife are two daughters; Mary Gregg, wife of Bill of MD, and Jill Finan of NV, and two grandchildren; Stephen Gregg, husband of Lauren Rodriquez-Gregg of VA, and Lauren Gregg, wife of Shil Patel of GA. Jack was preceded in death by his parents, his son; John Collins, a granddaughter; Julie Whittaker, and a son-in-law; Dick Finan.