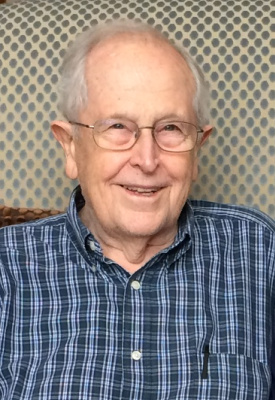 John H. Lewis, 91, resident of Willow Valley Communities, Willow Street, PA, passed away on Monday November 15, 2021 at Lancaster General Hospital. Born in Trenton, NJ, he was the son of the late Lester and Helen Lewis was the loving husband of Jean Lewis since 1955, celebrating their 66th wedding anniversary this year.

He received his BS in Criminology from Fresno State University. John enlisted in the U.S. Navy Reserves in 1948 and later called up to active duty and served aboard the U.S.S. Bradford (DD-545) as Signalman/Quartermaster Seaman during the Korean War. He returned to the US to begin Officer Candidate School and was later commissioned as an Ensign in the United States Navy Reserves and then assigned to Naval Investigative Services Pearl Harbor, HI. His Naval reserve career would span 20 years and his last assignment was to serve on the Naval Reserve Pistol team. He retired as a Lieutenant.

In his professional career, he was Vice President of Johnson & Higgins Insurance in New Orleans, LA and retired as CEO of Medical Indemnity CO-OP, Anchorage, AK.

Contributions in his memory may be made to the Shriners Children’s Hospital, 3551 N. Broad St. Philadelphia, PA 19140.

Offer Condolence for the family of John H. Lewis