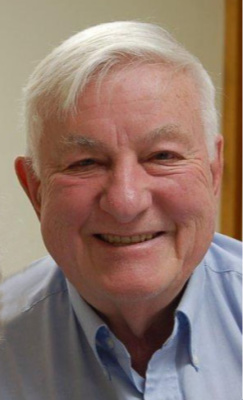 John Charles Delagrange peacefully joined our Lord on Wednesday, March 3, 2021. He was born in Barberton, Ohio to the late Charles Lloyd Delagrange and Esther Charlotte Muir Delagrange on June 27, 1932. He was the oldest of four and was preceded in death by his wife, Catherine M. Betts Delagrange, his brothers, Richard (Dana) and Jimmy and also his “adopted” daughter, Deborah Lynn Ingersoll of Wadsworth, OH.

He graduated from Barberton High School in 1950. He enlisted in the Army after graduation and was stationed at Kimpo Air Force Base in South Korea as an Arial Photo Interpreter. He was a member of the local Korean War Veterans Association. Upon discharge from the Army in 1952, he enrolled and graduated from art school and was employed at Ohio Boxboard and later Packaging Corporation of America where he retired as Graphic Arts Director in 1992.

John was an active member of several churches throughout his lifetime including Saint Mark’s Episcopal Church, Wadsworth Ohio, Saint Thomas Episcopal Church and Crossroads Wesleyan Church, both of Lancaster, Pennsylvania, and Columbia Church of God, Columbia, Pennsylvania. Each of these houses of worship was blessed to have him in membership and they continued to encourage his walk with our Lord and Savior. As a committed disciple, John continued an outreach ministry well into his 80’s to two adult care homes, The Vineyard in Lancaster, PA, and Our Home of Hope in Columbia, PA.  He shared the Gospel, played his banjo and harmonicas, prayed and visited with his friends there. He never met a person that he wouldn’t share the Lord’s blessings with. He was generous to a fault, with not only his love but his time and his hard-earned funds. He was filled to overflowing “with the Love of his Savior and Friend, Jesus Christ the Messiah” (his words). He gave freely of his time and his expertise in everything he did.  He was a man of his word, if he said he would do it, he did, and usually in a far better way than could be imagined.

He was an extraordinary graphic artist who throughout his 88 years, enjoyed using the talents he was given in ways too numerous to count. He created elaborate sets for vacation Bible school, designed a stained glass window at the entrance to Liberty United Methodist Church, Buckeye, Arizona and paid a fitting tribute to a cowboy friend at the new Holland sales barn, New Holland Pennsylvania.

He was extremely talented and could fabricate pretty much anything he was asked to make – whether it was made from wood, metal or even corrugated boxboard. Of his most notable projects: three-quarter scale stage coaches, Wells Fargo style. As well as a two thirds scale, completely furnished and stocked authentic Chuck wagon. He also made a 5-string banjo out of fiddle back maple, a spoon collector’s custom cabinet, rubber powered model airplanes and countless projects with his children, grandchildren and great grandchildren.

He was exceptional with mechanical projects as well. He kept a fleet of VW bugs and Karmen Ghia’s on the road for his four oldest girls and built go-carts from old riding lawn mowers for his son. He fixed many bicycles and wagons and pretty much anything that was broken.

He was an accomplished musician and played Banjo, Harmonica, Guitar and the spoons. He enjoyed many genres of music and especially Bluegrass. He was also a “Pun Master” and had a wonderful quick wit and sense of humor.  Most of all he was the best Dad, Brother, Uncle, and Grandpa One could hope for.

Offer Condolence for the family of John C. Delagrange