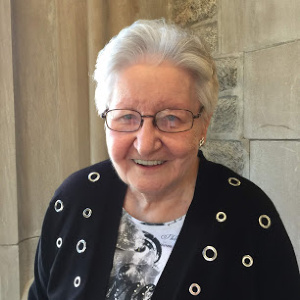 Joan M. (Purcell) Grier, 84, passed away on Saturday, December 28, 2019 at Masonic Villages Elizabethtown. She was the wife of Donald L. Grier for over 64 years.

Born in Fall River, Massachusetts, she was the daughter of the late John E. and Marie B. (Gagnon) Purcell.

Joan began her career as a telephone operator with AT&T in New Jersey, retiring after a long career working for the Commonwealth of Pennsylvania.

She was a member of the Pennsylvania Order of Eastern Star, Elizabethtown Chapter 407.

Surviving, in addition to her husband, are two children: daughter Evelyn Masters and son-in-law Gerard Frey, and son Douglas Grier and son-in-law Joseph Chaloka. Also surviving are a granddaughter Catherine Fischer and her husband Richard, as well as two great-grandchildren, Mary Catherine and Margaret Douglas Fischer.  She leaves behind four nieces, Janet Bornstein, Christine Pavao, Marilyn Bernier, and Susan Gardner, and a nephew, John Gardner, along with many other dear relatives and friends. She was preceded in death by her sister, Lucille Gardner.

Offer Condolence for the family of Joan M. (Purcell) Grier