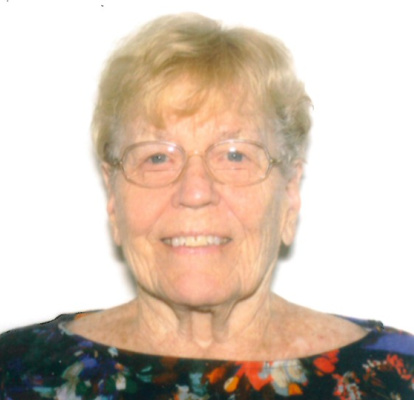 She is survived by her three children, Ellen Pollock of Millersville, Paul Pollock, married to Renee Ward Pollock of Scottsdale Arizona, and Mark Pollock, married to Michele Mulligan Pollock, of Brockton, Massachusetts. She was predeceased by a daughter, Louise Pollock Coury. She was also predeceased by siblings Sarah Krimmel wife of James Krimmel and the late Guy Detwiler, Eleanor Swab wife of Henry Swab, Mary Elizabeth Herr wife of George L. Herr, Henry Hambleton husband of Winifred Bowen and the late Mary Atkins, and William Hambleton husband of  Nancy Schnelli.

Mrs. Pollock was a graduate of McCaskey High School, class of 1949, attended Dickinson College, received a BS in Nursing Education from Cornell University-New York Hospital School of Nursing, and completed requirements as a Certified Registered Nurse Practitioner at Hershey Medical Center. She retired from the School District of Lancaster as Coordinator of Health Services in 1990 after 25 years of service.

She was a member of Bangor Episcopal Church, where she served on the vestry. She was formerly a member of St. James Episcopal Church, where she was a long-time choir member. She served many years as chairman of the Martin Luther King Scholarship Committee, and was a member of Standing Room Only, a group of retired teachers who sang at local nursing homes and service clubs. She was a volunteer at Millersville Meals on Wheels and at Penn Manor School District. She also served as clerk of elections in Manor Township.

A memorial service will be held at Bangor Episcopal Church, 2009 Main Street, Narvon, PA 1755 at a time and date to be announced.

Interment will be at Bangor Episcopal Church in Churchtown immediately following the service. Friends may greet the family in the parish house after the service.

Offer Condolence for the family of Joan Hambleton Pollock