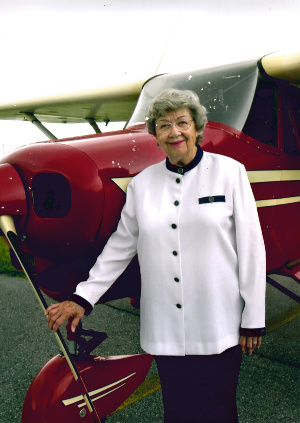 Jessie Jones Eckhart, 94, of Lititz, PA passed away March 18, 2019 at Brethren Village.  She was an amazing daughter, sister, wife, mother, grandmother, great-grandmother and friend.  Her life was dedicated to her family, friends and flying.

Born in Pughtown, (Chester County) PA, she was the daughter of the late Jesse P. and Reba S. Morrison Jones.  She was the wife of the late Dr. Howard D. Eckhart who passed away on December 24, 2014.

Jessie was the daughter of aviation pioneer Jesse P. Jones of Lancaster. She learned to fly airplanes before she received her drivers license.  She had a passion for flying her entire life and soloed at the age of 16 as a junior in high school.

After graduating from J.P. McCaskey High School in 1941, Jessie attended Penn State for one year studying Art Education prior to becoming a flight instructor.  She worked for the Navy and Army Government Contract Schools as a flight instructor during, and after, World War II.

She was a member of Aero Club of Lancaster, former member of Lancaster Country Club, 99 Club (a women’s pilot club) and the Chi Omega Sorority at Penn State.

Her hobbies included oil painting, traveling with her husband Howard in their airplanes, skiing, hunting, embroidery and she was an avid scrapbooker.

She was preceded in death by her husband, Dr. Howard D. Eckhart, by her son Howard S. Eckhart and by her sister, Helen J. Carter.

A Memorial Service will be held at St. Peter’s Evangelical Lutheran Church, 10 Delp Rd, Lancaster, PA 17601, on Thursday, March 21, 2019 at 1:30 PM.  A visitation will be held from 11:30 AM until the time of the service.  Interment will be private in Lincoln Cemetery.  To leave an online condolence for the family please visit: www.DeBordSnyder.com

Offer Condolence for the family of Jessie Jones Eckhart