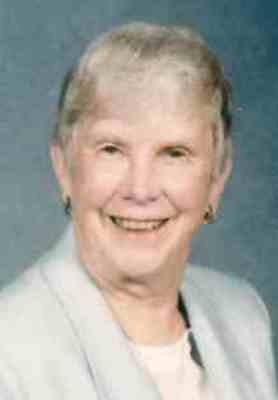 Jeanne M. Moury, 86, of Willow Street, PA, passed away on May 15, 2015 at The Glen, Willow Valley. She was born in Philadelphia, PA on September 26, 1928 and was the daughter of the late Dorothy M. (Calhoun) McNaul and G. Paul McNaul. She was proceeded in death by her husband, Dr. Nelson F. Moury Jr. and her sister, Dorothy A. McNaul. She is survived by three children, Kevin A. Moury of Harrisburg, PA, Carol M. and Ross H. Schwalm of Woodbridge, VA, and Clayton S. and Barbara A. (Bond) Moury of Oxford, PA, and her five grandchildren, Clinton O. Moury, Sean A. Moury, Ross N. and Allison (Brooks) Schwalm, Afton L. Schwalm, and Connor P. Schwalm. She was blessed with her first great grandson, Lincoln Bauer Schwalm, born May 5, 2015. Jeanne graduated from Frankford HS in Philadelphia, PA in January 1946. She graduated from Ursinus College in Collegeville, PA with a BS in Mathematics in June 1949 and met Nelson during her undergraduate studies. They were married in September 1951. They lived in Lafayette Hill, PA until 2003 when they moved to Willow Street, PA.

She was a Trustee of the Presbyterian Church of Chestnut Hill, PA and was very active in the Women’s Association to include mission work with the homeless of Philadelphia. She was a hand sewing crafter, an avid flower gardener and active member of The Garden Club of Philadelphia. She became a member of First Presbyterian Church of Lancaster, PA in 2004 when she moved to Willow Valley. She was an active member of the Willow Valley Quilt Club. Throughout her life, Jeanne traveled extensively to Europe, the Middle East, Japan, Hong Kong and Africa as well as within the United States, Mexico and Canada, but always enjoyed time spent with her family. The family wishes to express their sincere appreciation to the staff of The Glen at Willow Valley for their dedicated care. A memorial service will be held on Saturday 11:00 AM May 23, 2015 at Spring Run Auditorium, 950 Willow Valley Lakes Drive, Willow Street, PA. The family will greet friends before the service beginning at 10:30. Interment will be private. Memorial contributions may be made to First Presbyterian Church, 140 East Orange Street, Lancaster, PA 17602.

Offer Condolence for the family of Jeanne M. Moury