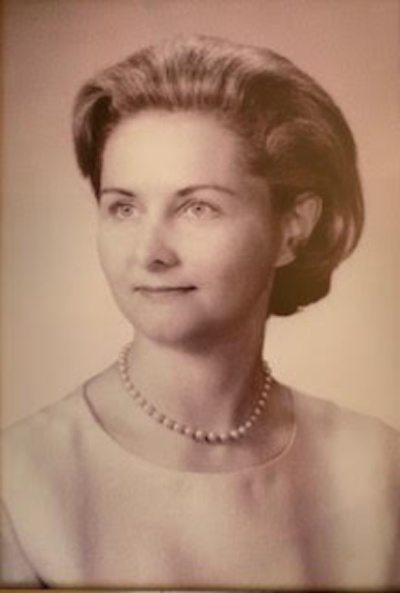 Jeanne had a lifelong love of learning. She graduated from Frankford High School in Philadelphia in 1943, received a B.A. degree from the University of Pennsylvania in History, and earned her M.A. degree from Temple University in Speech and Hearing. She believed that reading was the gateway to learning and taught her children (and grandchildren) to read at an early age. She was insatiably curious about the world, science, history, and politics. She often arrived at family dinners with post-it notes listed with topics to discuss which she had learned about on YouTube or reading the Wall Street Journal, ranging from Philadelphia Eagles quarterbacks to Bitcoin. She was an avid traveler, birder, wildflower enthusiast, photographer, and a formidable conversationalist and debater.

In 1949, Jeanne was introduced to Rowan C. Pearce, Jr. They met at Christmas, were engaged by Valentine’s Day, and married on May 28, 1949. They remained married for 67 years until Rowan’s passing in 2016. The poetic symmetry is not lost on us that Christmas was the day she met her husband Rowan in this life and the next. As her grandson Andrew wrote so eloquently, “my Grandpa said ‘you know what, it’s been six years and it’s Christmas. Today, Jeanne is my present.’” Partners in life, they were also partners in business and service. Jeanne played an integral role as the audiologist in her husband’s otolaryngology practice (first in Camden, NJ and then in Haddonfield, NJ) until her retirement in 1988.

Jeanne was dedicated to public service throughout her entire life. She was the President of the Board of Directors for the Visiting Nurse Association of South Jersey and volunteered for the Women’s Committee for the Philadelphia orchestra and the Haddonfield Public Library. She was an ordained Presbyterian elder, active on Ministry Council at Haddonfield Methodist Church, and traveled with her husband to Haiti, the Dominican Republic, Turkey, Nepal, and India on medical mission trips.

Her service was by no means limited to committees and organizations, and even her small acts of devotion were profound. She drove countless miles taking elderly neighbors to the food store and volunteered at “The Glen” at Willow Valley Communities. “It’s time to go see my old ladies,” she would say, late into her 80’s. She raised her children to have “the heart of a servant,” often paraphrasing Luke 12:48: “To whom much is given much is required.”

Jeanne was ferociously dedicated to her family and loved ones. Described as “the epitome of class and grace” by her friends, “elegant, brilliant, and a force to be reckoned with” by her children, and an “absolute badass” by her grandchildren, Jeanne was nothing short of exceptional.

Her grandchildren recall fond memories with Grandma of learning to walk, picking out prom dresses, riding on the High-Speed Line, attending “Grandma Camp”, playing board games, and drinking fresh squeezed orange juice. She was the type of Grandma who taught you to play ding-dong-ditch, and then let you ring her doorbell for hours, always acting surprised to find nobody there, and ignoring the giggles from the bushes.

In all things, Jeanne was devoted to Christ. A few days before her passing she said, “I’m not afraid. I know where I’m going.” He came to take her Home on His birthday.

Jeanne is survived by her children, Jonathan, Steven, and Katherine, as well as her three grandchildren, Allison, Taylor, and Andrew, and her in-law children, Philip, Nora, and Alyssa.

The family has asked for donations to be made to the Haddonfield Public Library of Haddonfield, NJ in memory of Jeanne K. Pearce. They also ask that you take time to learn something new today and pass it on.

Offer Condolence for the family of Jeanne Kirkman Pearce