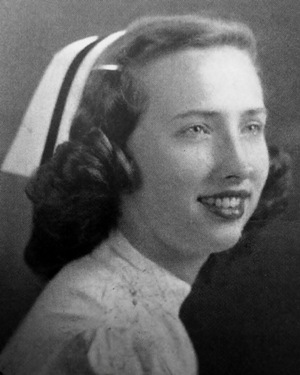 Jean Martin Wedel, 88, of Lancaster Pa, passed gently into God’s hands on February 19, 2016 surrounded by her loving family.  Born in Pittsburgh, PA, Jean grew up in Mt. Lebanon, Pennsylvania, and was the only daughter of Dr. Pauline and Albert Martin.

Jean met her husband Paul G. Wedel at the Army Navy Country Club in 1944 while still living in Pittsburgh.  She attended the University of Pittsburgh, graduating in 1948 with a BS degree in nursing.  She and Paul married a year later, and moved to Chicago, IL, Williamsport, PA, and finally settled in Lancaster, PA.

Jean was an extremely loving and giving person, volunteering throughout her life. She served two times as the chairwoman of the Williamsport PTA, and was a member of the American Association of University Women (AAUW).  Upon moving to Lancaster she volunteered with the General Hospital Auxiliary, while remaining active in the AAUW.  During this time, she also worked as a member, chairperson and board member of the League of Women Voters.  She served as a United Way volunteer and board member.  Jean regularly attended St. Thomas Episcopal Church, and supported the church and diocese in numerous executive roles including choir, Vestry, Jr. Warden and was the first female Sr. Warden at St. Thomas.  During the late Eighties, Jean provided nursing care as well as love and comfort to AIDS patients residing at the Betty Finney House.  Jean also worked as a nurse and office manager for the private practice of Dr. Ira Wagner of Ephrata during the Sixties and Seventies.

Most of all, Jean cared deeply for her family and friends, and brought joy, passion, fun and, most of all, love into the lives of everyone she touched – especially her husband, children and grandchildren.  She will be sorely missed by all who knew her.

Relatives and friends are respectfully invited to attend a Memorial Service at St. Thomas Episcopal Church, 301 St. Thomas Rd, Lancaster, PA 17601 on Saturday, March 19 at 11am with the Rev. Timothy Raasch, the Rev. Peter Greenfield and the Venerable Jane Miron officiating. The family will greet friends at the church on Saturday, March 19 starting at 10am until the time of service.  Interment will be private following the memorial.

Offer Condolence for the family of Jean M. Wedel