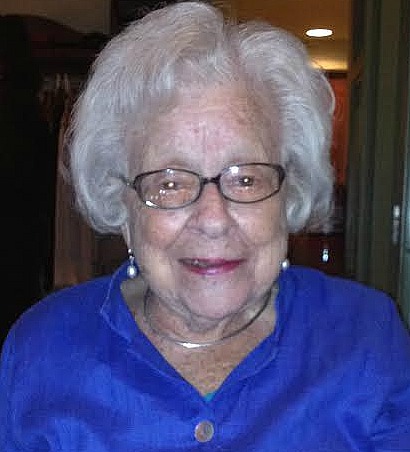 Jean Shaub Herr died on July 26 at Country Meadows of Lancaster.  She recently celebrated her 97th birthday on July 19th.

“Sis” was the daughter of Benjamin W and Mildred S Shaub.  Born in Lancaster in 1920, she graduated from Shippen School in 1938 and attended college in Swarthmore.   She married James B. Mossman in 1941, and in 1942, had a daughter, Patricia B Mossman, wife of W. Alan Shenk.  Jimmy was killed in action in World War II while in the Army Air Corps.   In 1946, Sis married Howard H. “Pat” Herr, who preceded her in death in 2012.  They had a daughter, Eleanor “Lynnie” Herr, wife of Steven Rabinowitsh.

Sis’s family were the founders and owners of Shaub’s Shoe Shop, which was an institution in downtown Lancaster for over 130 years.

Besides her two daughters, Sis is survived by two grandsons, Nicholas and Jackson Rabinowitsh,  and a step granddaughter, Diana L. Shenk.  She was predeceased by her brother, Benjamin Shaub, and her sister, Eleanor “Honey” Shaub Eshelman.

Interment will be private.  The family is planning a celebration of Sis’s life at a later date.

The family wishes to express their gratitude to the staff of Country Meadows of Lancaster for the wonderful and compassionate care they gave Sis for the past four years and for the excellent support provided by Hospice for the past six months.

Should anyone wish to remember Sis with a gift, her family would greatly appreciate a donation in her name to the Employee Assistance Fund of Country Meadows or to Hospice and Community Care of Lancaster.

Offer Condolence for the family of Jean Herr