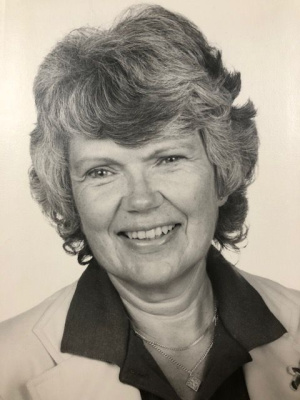 Janet C. Scala passed away at Willow Valley Communities on August 31 following a short illness.  Born in Erie Pennsylvania on January 19, 1934 she was the eldest child of the late DeWitt M. and Freda (Russell) Eddy.  Her early education was in the Jamestown New York public schools where her father was a noted educator and administrator.  Janet had an early desire for service, especially to the sick and injured, and in her teens was a “candy striper” at a local hospital.  This desire found its ultimate fulfillment when she enrolled at the University of Rochester (New York) School of Nursing and graduated in 1955 with her R.N.  She practiced nursing full time until two weeks before the birth of her first child.

Another reward of her hospital training was that she met her future husband, graduate student Robert Scala, while he was a patient.  They married in 1957.  As her family progressed through the school systems in their Fanwood, New Jersey community, Janet Scala became active in PTA, serving as President in the elementary school, intermediate school, high school and district organizations.  She also had a brief career in elected politics serving as the first woman of her party elected to the Town Council in the over 100 year history of that town.  Her hallmark was an unfailing ability to see more than one side to every issue and conflict.

Jan Scala will be remembered for her deep faith, her love of her family, her great compassion towards all who were suffering in any way and her selfless volunteering in many school, church and community programs.  Typical of her care for others, Janet has donated her body to medical research.  A memorial mass will be celebrated at a future date. In lieu of flowers, the family requests that donations be made to the Dr. Robert A. Scala and Mrs. Janet C. Scala’55 Nursing Scholarship at the University of Rochester School of Nursing, P.O. Box 270032, Rochester NY 14627-0032 or giving.rochester.edu.

Offer Condolence for the family of Janet C. Scala