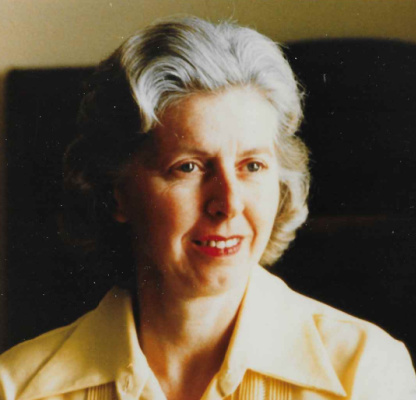 H. Jane Ladany, 93, a resident of the Willow Valley Retirement Communities, died October 5th at Willow Valley. She was preceded in death by her husband, Ivan Ladany, and her beloved granddaughter, Mary Katherine Ladany.
Born August 21, 1927, in Chuquicamata, Chile, Jane was the daughter of John B. Archer and Leo S. Archer. She came to the US in 1931 when her parents returned to West Virginia. Jane graduated from West Virginia University in 1948 with a BS in Chemistry. She worked at GATX Research Lab in East Chicago, Ind. and then at the Standard Oil of Indiana Research Lab in Whiting, Ind. and became a Technical Librarian for Standard Oil of Indiana at their Chicago headquarters.
Jane married Ivan Ladany in 1951 in Chicago. After graduate studies for Ivan, they moved to the Washington, D.C. area and Jane worked as a Technical Editor for the American Chemical Society. Jane and Ivan has three children born in Washington , D.C.  They moved to the Princeton, N.J. area in 1966 when Ivan accepted a position at the David Sarnoff Research Lab.
Jane became interested in environmental issues and became a member and then chairman for 2 years of the Delaware Township Environmental Commission. She was instrumental in starting the recycling of glass, aluminum and newspapers in the township.
Jane and Ivan moved to the Eastern Shore of Virginia in 1987 and Jane continued her environmental work. She worked with the EPA to establish the Eastern Shore of Virginia as a Sole Source Aquifer Area and with other citizens to stop the importation of polluted soil and hospital waste to the Eastern Shore.
In 1998, Jane and Ivan moved to the Willow Valley Communities and found time for many activities. Jane was active in gardening, flower arranging for the North lobby and duplicate bridge. She was a member of the Unitarian Universalist Church of Lancaster and a member of the DAR.
She is survived by her two sons, John E. Ladany and his wife Mary Patricia, Charles A.  Ladany, and a daughter, Susan L. Quake and husband, John S. Quake, and three grandsons, David, Michael, and Jeffrey Quake. Internment will be private and at the convenience of the family in Indiantown Gap National Cemetery, Annville, PA.  Memorial remembrances can be made to Hospice & Community Care of Lancaster PA. Arrangements entrusted to DeBord Snyder Funeral Home, 141 East Orange Street, Lancaster, PA, 717-394-4097.

Offer Condolence for the family of H. Jane Ladany