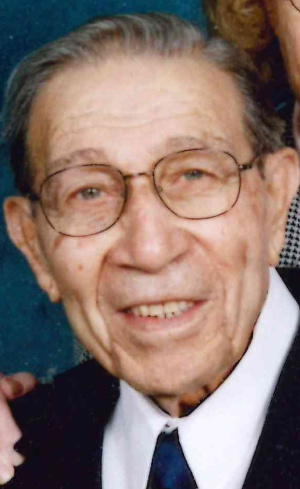 James Paul Sabatino, born July 29, 1918, passed away on April 22, 2019 at the Mennonite Home.  He was the loving husband of the late Marianne Jeanette Sabatino who preceded him in death in 2014.  Born in Jamesburg, NJ he was the son of the late Joseph Sabatino and Angelina (Milazzo) Sabatino.

After high school, he joined the US Navy and served from 1938 to 1945 as a diesel machinist on destroyers in both the Atlantic and Pacific Oceans.

Then he continued education by completing diesel engineering classes at Newark Diesel Institute and later studying at the Newark College of Engineering.

As a civilian and employee, he worked at Raritan Arsenal in NJ and Aberdeen Proving Ground in MD, completing 34 years of service.

His positions involved diesel automotive instructor and retried as a diesel engineer.

A man of many interests and abilities, he raised pedigree beagles, was known for his abundant vegetable gardens, repaired violins and played violin in the Aberdeen Chamber Orchestra. He also held a marine engineer and pilots’ certificate.

In N.J. and M.D., he was active in church and was a Sunday school teacher; Youth and Christian Service Brigade and was involved in missionary activities.

In 2002, he and his wife Jeanne moved to Woodcrest Villa in Lancaster, PA.  There he was loved for his friendliness, love of music and skill at playing pool.  For many years he played violin with Merry Hearts, a musical group.

He was a member of Westminster Presbyterian Church.

He is survived by a son, Gene, husband of Christine Sabatino, of West Unity, OH; four grandchildren, Elizabeth, Emily, James and Andrew; eight great-grandchildren; and numerous nieces and nephews.  He is also survived by a sister, Rose Varga.

Contributions in his memory may be made to the Benevolent Fund at the Mennonite Home, at address listed above or to Masonic Village Hospice, One Masonic Drive, Elizabethtown, Pennsylvania, 17022.

Offer Condolence for the family of James P. Sabatino