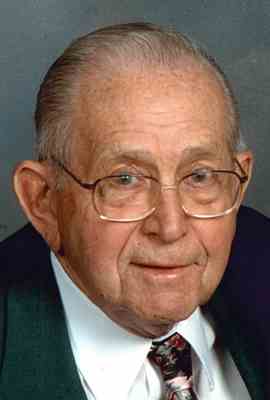 James was a machinist and retired from RCA after 36 years of employment.  Upon retirement he worked as a bailiff at the Lancaster County Courthouse. He was a member of the Hamilton Park United Church of Christ and was a past president of the consistory.  He was a past president of the Hamilton Park Playground Association.  James was a member of Lodge #43 F.&A.M. and had served as Master of the lodge in 1971.  His other memberships included the Lancaster Lodge of Perfection ASSR, Harrisburg Consistory ASSR, Lancaster Forest #27 Tall Cedars of Lebanon, and a member of the Lancaster Lodge #134, B.P.O.E.

James served in the U.S Army during World War II and was a life member of both the V.F.W. Post 7418 in Gap, and the American Legion Post #34 in Lancaster.  He enjoyed bowling and golfing.

A Masonic Service will be held on Tuesday, August 2, at 11:00 A.M. at the DeBord Snyder Funeral Home, 141 E. Orange St., Lancaster, PA with a Memorial Service following with Chaplain Timothy Nickel officiating.  Friends may call at the home on Tuesday from 10:00 A.M. until the time of the service.  Interment in Conestoga Memorial Park with full military honors.  In lieu of flowers, contributions in his memory may be made to Masonic Village Hospice, 1 Masonic Drive, Elizabethtown, PA  17022.

Offer Condolence for the family of James M. Scott