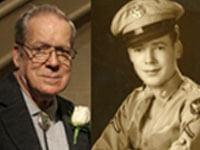 After attending McCaskey High School, Jim enlisted in the US Air Force in 1948 and was stationed in Japan for 30 months during the Allied Occupation and Reconstruction.  Following his tour of duty, he began working at Widder Brothers Mills Inc., a fabric manufacturing plant in Lancaster, PA.  Within 10 years, he was promoted to Plant Supervisor.  In 1975, the manufacturing division was relocated to the South, after which he purchased the wholesale/retail fabric operation and operated a fabric store outlet in Paradise, PA with his wife Mary Jane for 22 years.

In addition to his friends and family, he had three passions: buying and selling anything he could make a profit on including tools and antiques, a love of history, particularly anything related to the US military and Lancaster County, and using his hands to repair or build things such as his first and only home.

Jim was a member for 57 years of the National Rifle Association and the Lancaster Muzzle Loading Rifle Association where he served several leadership roles including corporate secretary for 33 years.  A great friend, husband, father and grandfather who will be missed, but his legacy will live on.

A life celebration gathering for friends and family will be held on Saturday, February 11, 2017 from 4:00 PM to 8:00 PM at the Sherwood Ballroom in the Heritage Hotel Lancaster located at 500 Centerville Road, Lancaster, PA 17601.

In lieu of flowers, the family asks that memorial contributions be sent to Hospice & Community Care, PO Box 4125, Lancaster, PA 17604 or www.hospiceconnect.org/memorial.

Offer Condolence for the family of James H. Frederick, Jr.