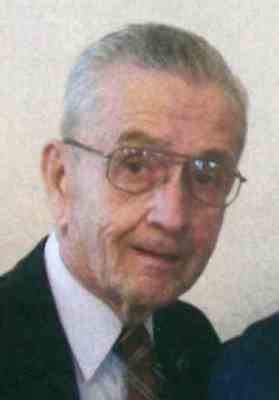 He was married 68 years to Barbara M. Eshleman Lefever.  Born in Marticville, he was the son of the late Jacob F., Sr. and Katie Thomas Lefever.

Early in life Jake had been a farmer.  He then was employed by Nauman Construction where he was concrete finisher for many years.  Following his retirement he spent a number of years working and volunteering at the S. June Smith Center.

He was a member of Byerland Mennonite Church and had served as a trustee.  Jake enjoyed hunting and was a member of the Willow Street Hunting Club.  His other interests included going to public auctions, watching the Phillies and Eagles and volunteering with Mennonite Disaster Service.

Surviving besides his wife are three daughters, Barbara J. wife of Ben K. Stoltzfus of Willow Street, Dorothy M. wife of Luke C. Hess of Willow Street, and K. Lorraine wife of Mike Williams of Lancaster; a son, Jacob Karl Lefever of Manheim; 7 grandchildren, 15 great grandchildren; a twin brother, Abram husband of Ruth Lefever of Lititz, and a sister, Ruth Mellinger and a sister-in-law Esther Lefever both of Lititz.  He was preceded in death by a sister Elsie Sangrey and by a brother Robert Lefever.

A Memorial Service will be held on Saturday, November 21, 2015 at 11:00 A.M. at the Byerland Mennonite Church, 931 Byerland Church Road, Willow Street, PA.  Friends may call at the church on Saturday from 9:30 A.M. until the time of the service.  Interment will be private and held at the convenience of the family in the Byerland Mennonite Cemetery.  In lieu of flowers, contributions in his memory may be made to No Longer Alone Ministries, 630 Janet Ave., Lancaster, PA 17601 or to the S. June Smith Center, 600 Eden Road, Lancaster, PA  17601.