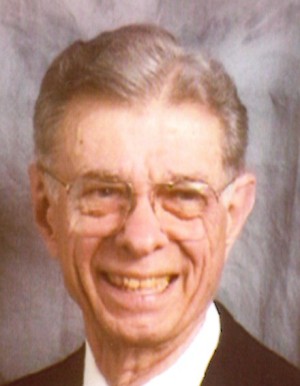 John M. “Jack” Norton, 94, passed away on July 27, 2015 at Lakeside at Willow Valley, Willow Street, PA.  He was the loving husband of Laura Martin Norton with whom he celebrated 69 years of marriage on July 18.

Born in Sioux City, Iowa, Jack was the son of the late Ira E. and Ruth Jeanette Smith Norton and brother of the late Richard James Norton.  He received his Bachelor of Science degrees in Electronics and Mathematics from University of Michigan in 1943 and his Masters degree in Electrical Engineering in 1946.

He proudly served his country in the United States Navy during World War II.  While in the Navy he worked in the Naval Ordnance Laboratory in Washington, D.C. where his work resulted in 12 patents.  He was a member of ETA KAPPA NU Electrical Engineer Honor Society.

He worked as General Manager for Advanced Systems Development Division of IBM, retiring in 1971.  After his retirement, Mr. Norton worked as a consultant to IBM Corporation in New York, NY for 14 years.  He also served on the Advisory Board for the Christian Herald, and was on the Board of Trustees at The Kings College in Briarcliff Manor, NY.

He was an active member of Grace Church of Willow Valley.

An avid exerciser, he started running in 1976.  He received his private pilot’s license in 1978.  Additional hobbies included photography, computers, gardening and investments.  Mr. Norton’s interest in HAM radio began in his early “teens” and he was a licensed operator from that time until 1986.

Relatives and friends are respectfully invited to attend a funeral in Grace Church at Willow Valley, 300 Willow Valley Square, Lancaster, PA 17602 on Thursday, July 30, 2015 at 2:00 P.M. with Pastor John Smith officiating.  Friends may call at the church on Thursday from 1:00 P.M. until the time of service.  Private interment in Conestoga Memorial Park will take place at the convenience of the family.

In lieu of flowers, memorial contributions may be sent to: Grace Church at Willow Valley at the address listed above or Global Disciples, 315 W. James St., Suite 202, Lancaster, PA  17603

Offer Condolence for the family of Jack M. Norton