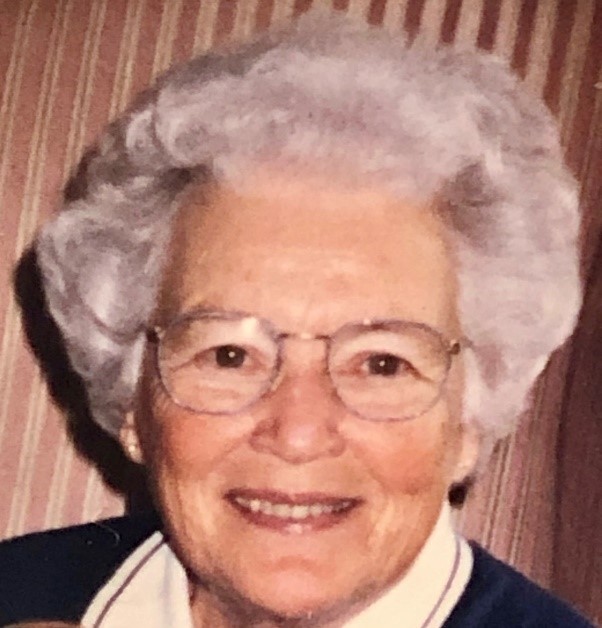 Helen Furniss Shank,102, succumbed to Covid 19 complications on January 2, 2021. She was the wife of the late Dr. James F. Shank and the late Richard E. Shock.

Helen was the daughter of the late Carl T. Furniss and Abbie Whiteside Furniss and was born on the Furniss Farm, in Little Britain Township, Pennsylvania on April 5, 1918. The snow was so deep that day that her father had to hitch the horse to the sleigh to fetch the midwife.

Helen grew up on a picturesque subsistence farm nestled along the Octorara Creek in Spruce Grove, southern Lancaster County. In addition, her family ran a grist and lumber mill that was on the farm property. Her father died in a mill accident when she was six and the oldest of four children. An older brother Joseph had died in a previous accident. She helped her mother run the farm as best she could by starting the day tending the cows with her brother Carl and finishing the day filling the wood boxes. As a senior in high school, Helen stayed with her grandmother Whiteside to help her through terminal disease. She graduated from Oxford High School, class of 1935, and attended Lancaster Business School.

Helen married Richard Shock on October 7,1939. She initially worked in Lancaster at the Hamilton Watch Company, where her husband and father-in-law also worked. She and Richard settled in Manor Township where they raised their children Kenneth, born September 30, 1942 and John, born April 10, 1945.  Richard Shock founded Micro Precision Tool and Manufacturing.  After his death, Helen continued the business until her retirement. She moved to 430 Woodcrest Avenue, Lititz, after marrying Dr. James F. Shank, who practiced dentistry in town. Helen and Jim subsequently moved to an Independent Living Cottage at Luther Acres, Lititz, where she lived until her death.

Helen was a member of the First Presbyterian Church in Lancaster where she served as Deacon, Reserve Elder and superintendent of the Sunday School junior department. She was a member and former officer of Presbyterian Women. She served on the Citizens Committee to build Penn Manor High School and on the election boards of Manor Township and Lititz Borough. She was a Red Cross Grey Lady at Lancaster General Hospital and an officer of the Lititz Women’s Club.

She enjoyed gardening, needlework, reading, and golfing as a member of Meadia Heights Golf Club. Helen valued family above all. In the 1970’s she traveled four times to the Bahamas and Virgin Islands to sail with son Ken and his family. Then for thirteen years, she made annual trips to Kona, Hawaii, to spend time with them. While there she sharpened golfing skills on the world famous Mauni Lani golf course.  She frequently hosted her son John and his family at her Woodcrest Avenue home. She always attended the graduations of her grandchildren even when it took her many times zones away. She regularly attended the Whiteside reunion held at her Uncle Norman’s farm, and sponsored a wonderful Furniss reunion.  At her 100th birthday party Helen’s life was celebrated by Shock, Furniss, Whiteside, Sloan, Paxton, Shank, and Weaver family members and friends from Luther Acres. Her cottage is full of photos that reminded her daily of her family history, her children, grandchildren, and great grandchildren. Even in her 103rd year, her favorite activity was a road trip to southern Lancaster County where she relived memories of her joyous life. Helen was a vibrant person, who lived her life to the fullest, and brought warmth to those who met her.

Helen will be buried at the Union Presbyterian Church, Kirkwood, next to her two husbands and her parents. Because of the current Covid-19 situation, a memorial service will be scheduled at a later date.

Offer Condolence for the family of Helen Furniss Shank