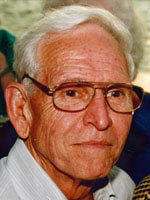 Harry H. “Bud” Landis, 87 of Lancaster, PA passed away at his home on Wednesday, May 24, 2017 surrounded by his family. He was the husband of Gwen (Caulwell) Landis to whom he had been married nearly 66 years.

Born in Lancaster, he was the son of the late Harry H., Jr. and Esther (Mumma) Landis.

He was a 1948 graduate of Mercersburg Academy and attended Franklin and Marshall College from 1948-1950. He was the owner of Landis Electric, an electrical appliance business which was founded by his father. Most recently he worked part-time at Darrenkamp’s Food Market, in Mt. Joy.

Bud was a member of the former Lancaster Jaycee’s and Lancaster Chamber of Commerce. He was on the Board of Directors of Maple Grove Swim Club and served as Treasurer from 1970-72 where he initiated ice skating in the pool and quarry for several years. He was an avid tennis player and enjoyed playing ice hockey in his earlier years.

Relatives and friends are respectfully invited to attend a Memorial Visitation at DeBord Snyder Funeral Home, 141 E. Orange St., Lancaster, PA 17602 on Sunday, May 28, 2017 from 2:00-3:00 p.m.
Please omit flowers. Memorial Contributions in Bud’s memory may be sent to the charity of one’s choice.

Offer Condolence for the family of Harry H. “Bud” Landis