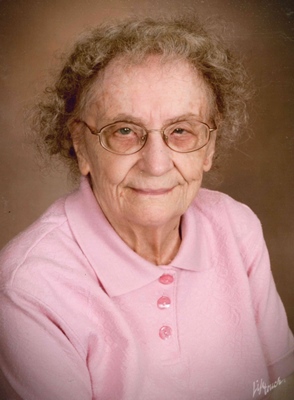 Grace S. Hill, 92, of Millersville, PA passed away on September 28, 2017 at Masonic Village in Elizabethtown, PA. She was the loving wife of Ronald E. Hill, Sr. who passed away in 2011.
Born in Lancaster, PA on January 22, 1925 she was the daughter of the late John and Beatrice (Trimble) Gilbert.
She was a member of First United Methodist Church, Lancaster.
Grace worked in the kitchen of Lancaster General Hospital prior to her retirement in 1990.
She enjoyed reading, doing Sudoku puzzles, putting together jigsaw puzzle and the Philadelphia Phillies.
Grace is survived by two children, Barbara Hill of Millersville with whom she resided, and Ronald E. Hill, Jr., husband of Polly of York, PA; two grandchildren, Jacqueline and Bradley Hill of York, PA; and two sisters, Betty Shenk of Lancaster and Mary Gohn of Lancaster.

Relatives and friends are respectfully invited to attend a funeral service in DeBord Snyder Funeral Home, 141 E. Orange St., Lancaster, PA on Tuesday, October 3, 2017 at 10:30 a.m. Friends may call at the funeral home on Tuesday from 9:30 a.m. until the time of service.
Interment will be in Riverview Burial Park.
In lieu of flowers, contributions in Grace’s name can be made to Alzheimer’s Association, 706 Rothsville Road, Lititz, PA 17543

Offer Condolence for the family of Grace S. Hill