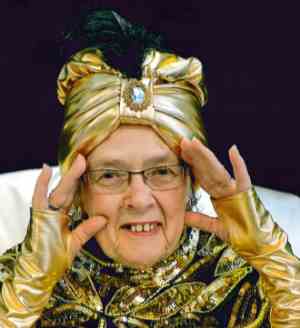 Always looking on the bright side of life with fun-filled energy, Grace Elizabeth Lentz, 89, a long time resident of Strasburg Pike, Lancaster, died Friday, March 24, 2017 at the Quarryville Presbyterian Retirement Home where she resided for the past two years. Although she will be very much missed here on earth, heaven has received a truly wonderful person.

She was the wife of the late A. Russell Lentz who died on August 29, 2014. Born in Lancaster, she was the daughter of the late Alva and Minnie Belle Patterson Hershey.

Grace graduated from J. P. McCaskey High School and was a member of the Class of 1946. Grace retired from the former Joe Myers Restaurant where she had worked for many years. Prior to that she worked at the Donut Tree, Bucks Diner, and early in life at the Singer Sewing Factory.

She was a member of Trinity Lutheran Church and in her early years was a member of the choir. Her interests included reading late into the night, playing bingo with new found friends at Quarryville Presbyterian Retirement Home, making crafts, working on adult coloring books, traveling countless times throughout New England, and taking care of her beloved cats. In addition, Grace was very much devoted to her husband and was a gracious lifelong caregiver to Christine Lentz who has special needs. Grace had spent many hours volunteering with Special Olympics and the ARC of Lancaster. She and her husband, Russell, had spent most of their twenty-some retirement years split between living at their Log Cabin deep in the mountains in Adamant, Vermont and their home on the Strasburg Pike, Lancaster.

A Funeral Service will be held on Friday, March 31, at 11:00 A.M. at Holy Trinity Lutheran Church, 31 S. Duke St, Lancaster, PA with the Rev. Timothy Mentzer officiating. Friends may call at the church on Friday from 10:00 A.M. until the time of the service. Interment will be at Riverview Burial Park, Lancaster, PA. In lieu of flowers, contributions in Grace’s memory may be made to the Humane League of Lancaster County, 2195 Lincoln Highway East, Lancaster, PA 17602.

Offer Condolence for the family of Grace Elizabeth Lentz