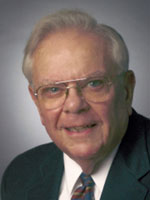 Glenn E. Orndorf, 86, formerly of 21 Cedar Lane passed away on October 7th of natural causes at Homestead Village.
Mr. Orndorf was a prominent Realtor and insurance broker for over 40 years and returned as president of Glenn E. Orndorf, Inc. in 1987. His firm succeeded that of Leo I. Hain, Inc. of which he served as president.
Glenn was a graduate of Millersburg High School and a 1946 graduate of Penn State University and a Life member of Sigma Phi Epsilon fraternity. During World War II he served in the U.S. Navy on the battleship USS South Dakota in the Central and Southwest Pacific Theatres from which he was chosen and assigned to Naval Reserve Officer Training and earned his commission as Ensign.
Mr. Orndorf served as treasurer of Manheim Township Municipal Authority and was Treasurer of the Board of Trustees of Thaddeus Stevens College of Technology where he was awarded the Honorary Degree of Doctor of Public Service. He was president of Lancaster County Realtors Association in 1969, a former Trustee of Highland Presbyterian Church, a Director of Lancaster Federal Savings and Loan Association and also president of Penn State Alumni Club of Lancaster County. He was a Charter and Life member of Sertoma Club of Lancaster, a 50 plus year member of the Hamilton Club, the Pirates since 1982, and the Military Officers Association of America, the American Legion and Veterans of Foreign Wars.
Born in Millersburg, PA Glenn became an accomplished trombonist and played first chair in numerous high school Forensic District Band and Orchestra events as well as the State Band. At Penn State he was a member of the Glee Club, and was leader of the NROTC band and was elected president of the University Blue Band and the Symphony Orchestra. Upon marriage and residing in Lancaster he became a member of Lancaster Symphony.
Since 1950 Mr. Orndorf has been a member of Lamberton Lodge # 476 and a 32 degree Masonic member for over 60 years of Harrisburg Zembo Temple. He was a former member of the Jr. Chamber of Commerce and a committee chairman of the Lancaster Chamber of Commerce and Industry. He also served as a Red Cross volunteer at Lancaster General Hospital.
Glenn was the son of the late Harry A. and Mabel Kahler Orndorf. Preceded in death were his brothers John H. and Dr. James F. Orndorf.
His deceased wife of 59 years, the former Betty Jane Hain and is now survived by two daughters, Constance E., wife of Dennis W. Jeff of Lancaster, and Jayne O., wife of William M. McCawley, Jr.of Steamboat Springs, CO; five grandchildren, Jamison D. Jeff (Heather) of Falls Church, VA; Meredith Jeff Oakes (Brad) of Niskayuna, NY; Catherine (Katie) McCawley Harter (Doug) of Madison, NJ; Elizabeth (Lizzie) McCawley Mathey (Seth) of Steamboat Springs, CO; and Andrew McCawley of Steamboat Springs, CO, and eight great-grandchildren. He enjoyed travel, gardening, bridge and fishing.
A memorial service in his honor will be held at Highland Presbyterian Church, 500 E. Roseville Rd, Lancaster, on Monday, October 17, 2011 at 11:00 A.M. Friends may call at the church Monday from 10:00 A.M. until the time of service. Please omit flowers. Contributions in his memory may be sent to the charity of your choice.

Offer Condolence for the family of Glenn E. Orndorf