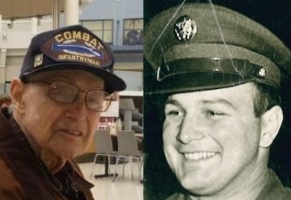 George W. Myers, Jr., 85, of Lancaster, entered into rest after a long illness surrounded by his family on Tuesday, September 15, 2015 at Moravian Manor, Lititz.

Born in Lancaster, he was the son of the late George W. and Violet Frank Myers. He was the husband of the late Mary Lou Myers who passed away in 2011.

George W. Myers, Jr. was a 1948 graduate of J.P. McCaskey High School where he played football. He was a sergeant in the United States Army fighting in the Korean War from 1951-1953. Then he was in the reserves until 1957. George was very proud of his service to our country and wore his Korean War hat almost every day during his elderly years. This brought on conversations between others who served in the war since they had so much in common.

Penn Highway Transit Co. of Lancaster, PA was a family business where he worked as an auto mechanic /bus driver from 1948-1970. After Penn Highway was sold out to Conestoga Bus Co., he moved his family to Kutztown, PA where he took a job as a bus mechanic for Carl Bieber Bus Co. until his retirement.

Surviving are three daughters: Linda A., wife of Kenneth Axe of Belleview, FL, Karen L., wife of James Maser and Nancy J. Elaabar, both of Lancaster; a son: Thomas G. Myers of Lancaster; 5 grandchildren and 9 great-grandchildren. He was preceded in death by his brother, Jay Myers, a grandson and a great-granddaughter.

A graveside service will be held at Mellinger Mennonite Cemetery, 1916 Lincoln Hwy. East, Lancaster, PA on Monday, September 21, 2015 at 11:00 a.m. with the Rev. Dr. John Light officiating. The family will greet friends immediately following the service.

Offer Condolence for the family of George W. Myers, Jr.