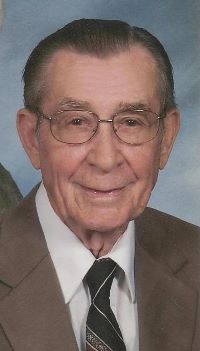 George Logdon, age 89, of Lancaster, passed away peacefully on August 15, 2015, surrounded by his loving family.

He was born on May 5, 1926, in Vesta Six, PA, to the late Frank and Mary Kostura Logojda. He was predeceased by his wife Jane in 2013. Left to cherish his memory are his daughters, Diane (David) Heinmiller, Columbus, Ohio and Kim (Randy) Albright, Mechanicsburg; grandchildren, Stephanie, Matthew (Jamie), Michael (Abbey) and Megan; great grandchildren, Connor, Annabelle, Jadon, and Adam; sister, Elizabeth McKay; brother-in-law, Bill (Suzanne) Ryerson; and numerous nieces and nephews.

George graduated from Rahway High School in Rahway, New Jersey, in 1943. As a student, he was elected class officer for four years. He was a member of the National Honor Society, basketball team, and was voted most considerate, best speaker, and best worker for his class and his school. He entered the Army Air Forces where he proudly served his country, ultimately reaching the rank of Second Lieutenant. George attended Cornell University and graduated with a degree in Administrative Engineering in 1950. He then moved to Lancaster to work for Armstrong Cork Company and shortly thereafter, married his college sweetheart Jane. They remained in Lancaster and celebrated over 61 years of marriage.

As an industrial engineer at Armstrong, George invented and obtained a patent for a device that was used for feeding cork discs to a crown assembly machine at the Lancaster Closure Plant. After his tenure at Armstrong, George worked at Kerr Glass in Labor Relations until his retirement in 1984.

George was known for his quick wit, dry sense of humor, organizational skills, and strong work ethic. He lived an active life and was very involved in neighborhood activities. An avid golfer, he was a longtime member of The Conestoga Country Club, where he played often and scored a hole in one on the 185-yard, number five hole. He also enjoyed fly fishing in the creeks and streams of Pennsylvania and was skilled at tying his own flies. Whether designing and building a piece of furniture, or expressing his more artistic side with oil paint on canvas, George’s meticulous nature and attention to detail was always evident.

George deeply loved his family and was proud of the accomplishments of his children and grandchildren. He leaves behind many friends and will be sorely missed.

Relatives and friends are respectfully invited to attend a Graveside Service with Military Honors accorded by the Red Rose Veteran’s Honor Guard and the Vet 21 Salute Honor Guard, at Conestoga Memorial Park, 95 Second Lock Rd., Lancaster, PA on Friday, August 21, 2015 at 10:00 AM.

The family will greet friends at First Presbyterian Church, 140 E. Orange St., Lancaster, PA on Friday, August 21, at 11:00 AM, immediately followed by a Memorial Service at 12:00 Noon.

Offer Condolence for the family of George Logdon